No cooling down the Rockies as they roll out of the All-Star break, beat Padres 10-1.

Share All sharing options for: No cooling down the Rockies as they roll out of the All-Star break, beat Padres 10-1.

The Rockies sent a message to the two NL West teams ahead of them that there will be no letting up this season, as they clobbered the San Diego Padres to gain some ground.

Dexter Fowler hit a key two out, two run single in the fourth inning to break a one to one tie, and the Rockies offense took off from there. Clint Barmes and Seth Smith each hit home runs.  Todd Helton went four for five with two doubles (for a career total of 498 now) and every Rockies starter had either at least one RBI or run scored in the 10-1 romp over the San Diego Padres.

Aaron Cook battled his way through six innings, and though he still showed some of the command woes that had affected his previous two outings, he also displayed some tenacity to get through several tough jams and finished with a season high 8 strikeouts. The last time Cook struck out eight was June 20, 2007 against the Nationals.

Matt Daley and Manuel Corpas, who was making his return to the Rockies from the disabled list, held serve for the final three innings. The Rockies with the win improve to 48-41 and climbed to within eight games of the division leading Dodgers and one and a half games of wild card leading San Francisco. This was the most lopsided win for the Rockies since defeating the Angels 11-1 on June 22, let's hope the team makes sure not to have a similar let down in the remainder of this series that it did in that series just up the 5 freeway in Anaheim. The Padres and Rockies continue their four game set tomorrow night. 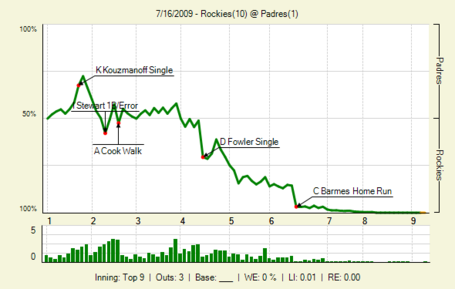 1500 comments in the two threads, it was quite a night.