The Colorado Rockies won their third straight game and continued their assault on the leaders of the NL West by beating the Padres five to three on Friday night. Clint Barmes homered for the second straight game and Ubaldo Jimenez threw seven innings, collecting ten strikeouts along the way to victory. Chris Iannetta and Ian Stewart also supplied key run scoring hits, Franklin Morales pitched a perfect eighth and Huston Street pitched the ninth for his 23rd save of the season.

With both the Dodgers and Giants losing, the Rockies (49-41), gained a game on each in the standings and now sit a half game behind the Giants for the National League wild card lead and seven games behind the Dodgers for the NL West lead. The Rockies and Giants are starting to see some separation from the pack in the wild card chase, as a three game gap has opened between the Rockies and the pack of chasers from the NL Central and East divisions. 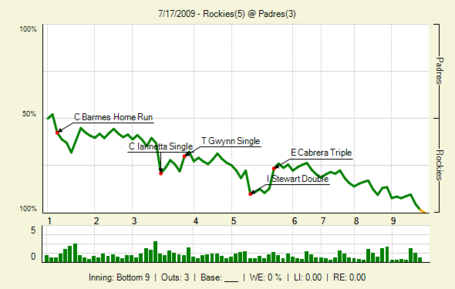