Tonight's loss to the Padres was more disappointing than anything else. The Rockies' (49-42) offense was shut down by the Padres' pitching staff (only four hits), which this season is a pretty rare occurrence. Granted, Petco Park kept a couple of Colorado fly balls from being homers--which certainly would have been nice to have.

Altogether though, the Rockies just didn't have too many chances, and Brad Hawpe (who did double in the Rockies' only run in the first) grounded into two double plays to ruin those scoring opportunities.

Both Kevin Correia and Jason Hammel pitched well (though Jason did walk three and hit three--Edgar Gonzalez in the head) but neither got a decision. Those honors went to Greg Burke (2-1) and Joel Peralta (0-3)--who gave up a homer to Coloradan Chase Headley in the seventh. Peralta just didn't look good tonight--that's the danger of trusting Joel Peralta with anything of importance.

With the loss, the Rockies remained 0.5 GB in the Wild Card standings (SF also lost) and lost a game to LA (8 GB). The Rockies can still get a series win and 50 wins tomorrow against Padres prospect Mat Latos, who is making his major league debut, countering with Jason Marquis. 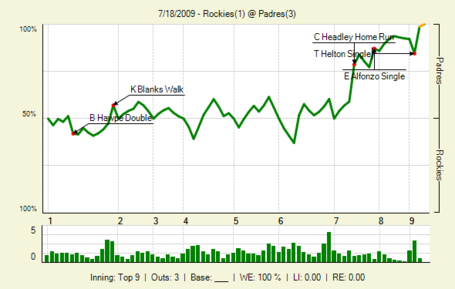