Hawpe makes sure the hits keep coming against Padres -

But make no mistake, every Rockies' game is an exercise in Jim-nastics. When people ask why I think the Rockies have a shot at the playoffs, my first response is always: manager Jim Tracy.

Look, not to take anything away from Tracy, he's a done a great job for us so far on the bench, but if the manager is the first thing you think of when asked whether your team has a shot at the playoffs, you're in trouble. When people ask me this question, I say our starting rotation is deeper than anybody's save for maybe the Braves in the NL, and that our lineup is just about as deep. Huston Street and the team's bench are next on my list. After that, probably I get to Tracy. Maybe this is just hyperbole by Renck in writing up the guy and he doesn't actually mean that Tracy's really his first response, but if he doesn't know what's really driving the Rockies success right now, he needs to take a closer look.

Stewart out of starting lineup with leg injury -

Ian Stewart inserted as starting third baseman, Rockies start winning lots of games. Ian Stewart sits out with leg injury, Rockies lose... coincidence? Actually, if we're talking about just the one game last night, the answer is most certainly yes, it is a coincidence. The bigger picture? Probably not.

An exquisitely detailed map of the Post All-Star Break wild card chase after the bump... 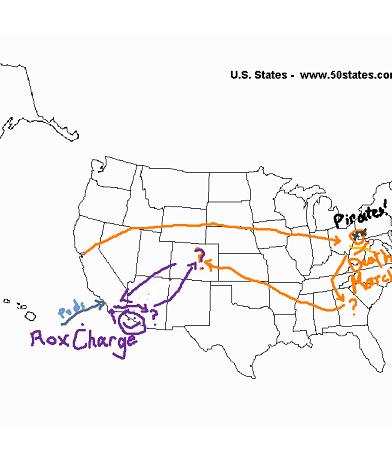 July 18, 2009: - The Giants have seemingly made a tremendous tactical error by trying to sneak up on the Rockies from the East for our series by travelling through the Pirate infested areas of Western Pennsylvania. They might not get a kind reception from the Southern tribes, either. The Rockies are trying to collect some tribute from the weaker forces of the Southwest before the showdown with the Giants in Denver next week, but Friar Chase Headley's Rebellion needs to be quickly squashed this afternoon before the Snakes get some insubordinate ideas of their own.

The result thus far is that the Giants' playoff odds have dropped 15% in the past week, while the Rockies have gained 12%. Not a bad way to start the final campaign for a playoff spot. All-Star General Jason Marquis, Rockies nation is counting on you to continue this trend today.