Jason Marquis struggled in his last outing and was dealing with a middle finger blister and a strange schedule coming off his first All-Star game appearance non-appearance.  Opposing him was a green 21 year old fireballer making his MLB debut.  This is the type of game the Rockies likely lost in April/May.

It looked as if it were a possibility early, as Mat Latos (0-1, 4.50) struck out four of the first seven men he faced, allowing no runs and no hits the first two innings.  Carlos Gonzalez proved the Rockies were not Latos intolerant by manufacturing the Rockies first run all with his toolsy grittiness.  He singled on a bunt, advanced to second on a Marquis sac bunt, stole third and advanced home when Jose Lobaton threw the ball away.

Latos still looked to have a chance to keep San Diego in the game, but he was pulled after four innings due to being kept on a strict pitch count.  He had thrown 75 pitches, just 24 less than it took Jason Marquis to polish off his eight innings of work.  Towering home runs by Ian Stewart (off Latos) and Brad Hawpe (off Mike Ekstrom) gave Marquis all he needed.

The Rockies' starter was almost Marquis de Dodger Stadium today, going eight innings, allowing just one run on five hits, walking no one and throwing just 96 pitches.  He helped the Rockies become one of three teams with 50 wins in the NL West (more on this tomorrow), and he has won nearly a quarter of those with 12, which leads the entire universe.  He even threw in a 2 RBI double for good measure.  Box Score

Join after the jump for the fangraph and the roll call. 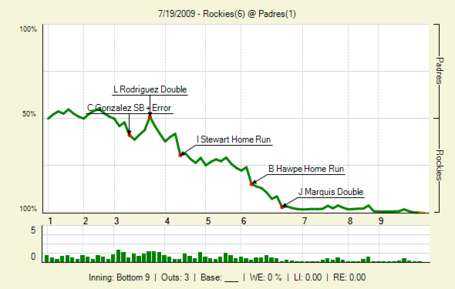