Have we seen anything more beautiful this season than what you see below?

Coupled with a San Francisco loss to the Braves, Jorge De La Rosa led the Rockies to the top of the Wild Card standings Monday night. We saw Really Good Jorge De La Rosa on the mound tonight for seven innings. A lone Mark Reynolds homer was the only blemish for JDLR during his six strikeout performance. Oh, and he had two hits and drove in two runs.

The offense took off with a two-run double by Troy Tulowitzki in the first and Dexter Fowler two-run homer in the second, his fourth of the season. Seth Smith added two runs on a single in the third, and Chris Iannetta notched the 10th run in the fifth inning with his 11th homer. Oh, before I forget, Brad Hawpe stole his first base of the season.

Then came the eighth and ninth innings. Joel Peralta allowed two runs on three doubles before Franklin Morales induced a double play to end the inning. Not that bad after you look at the ninth inning. Manny Corpas allowed a leadoff triple and then an RBI single. He then recorded two outs before failing against Stephen Drew, who hit a homer. Huston Street started to warm up in the pen, but that was uncessesary as Corpas finally got the last out.

Graph and Row Call after the jump. 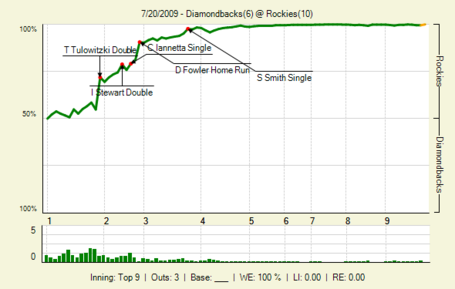