D-Backs 6, Rockies 5: The bullpen continues where it left off last night, helps lose the game for Colorado.

Share All sharing options for: D-Backs 6, Rockies 5: The bullpen continues where it left off last night, helps lose the game for Colorado.

Well, that was stupid. To quote Marc Stout from the FSN Live Postgame show:

Stephen Drew went 4-for-4, walked, scored twice, and drove in a run as he continues to be a ridiculously annoying pain in the rear. On top of that, Miguel Montero hit a tie-breaking two-run homer off of Juan Rincon in the top of the 8th inning to give Arizona a lead that their bullpen was able to cling onto.

The turning point in the game came when Dexter Fowler misplayed a line drive off the bat of Justin Upton that went over his head, scoring two runs and putting Upton on third. Before then, the Rockies were really dominating the game, as they forced Max Scherzer to throw 30 and 31 pitches in the first two innings. Troy Tulowitzki homered in the second, and Ian Stewart followed with a triple and scored on a wild pitch. Then, Dexter Fowler came through with a two-out RBI single to plate Chris Iannetta and put the Rox up 3-0. The lead then became 4-1 after another RBI hit by Fowler, but then the wheels fell off, as explained above...

After Arizona took the lead, Ian Stewart walked to lead off the bottom of the 8th and Ryan Spilborghs brought him home with a two-out triple that nearly cleared the right field scoreboard. Fowler then grounded out after Chad Qualls entered the game, and Qualls was able to set down the Rockies in order in the 9th to earn the save.

Aaron Cook pitched 6.1 innings of mostly solid baseball, but left a few too many pitches up and was punished by an aggressive D-Backs offense. He finished with 4 runs allowed on 8 hits and a walk, and struck out 4. The middle-relief combo of Franklin Morales and Juan Rincon really blew up. Morales allowed three baserunners in the time it took him to get just one out, and allowed the tying run to score. Meanwhile, Rincon lasted an inning and a third and gave up 2 runs on 2 hits and struck out 2. The performance of the bullpen for the last week or so should be raising a big red flag to the front office, hopefully signaling the need for a deal to be made to acquire a decent bridge to Huston Street.

Offensively, Dexter Fowler finished 2-for-5 with 2 RBI's, while Tulowitzki hit his 17th home run of the season and Ian Stewart and Brad Hawpe each had an extra base hit and a couple of walks. Todd Helton was 0-for-5 with a K and Seth Smith was 0-for-4. 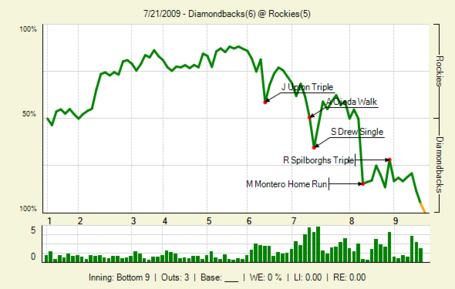 Tomorrow: Jon Garland vs. Ubaldo Jimenez at 1:10 PM MT. Here's to a good, long game from Ubaldo. Either that, or enough offense to make the bullpen a non-factor.