Thursday Pebble Report: Stuff actually happened in the minors last night other than Chacin getting pulled

Share All sharing options for: Thursday Pebble Report: Stuff actually happened in the minors last night other than Chacin getting pulled 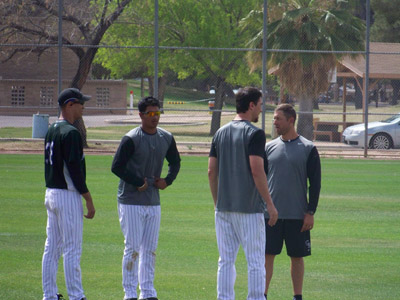 Esmil Rogers (1-1, 6.23) struggled again in what was his third AAA start vs the Las Vegas 51s (Blue Jays).  He started with three scoreless innings before allowing a 2 run HR to Toronto uber prospect Travis Snider, then was touched up for three runs in the seventh.  He has allowed 3 runs, then 4, then 5 in his AAA career, and he struck out no one for the first time all year.  Still, the Sky Sox offense was strong enough to leave him in line for the win.
Christian Colonel fell a single shy of the cycle, driving in four runs.  Chris Frey doubled and singled twice and drove in two.  In spite of zero offensive production from touted prospect Eric Young Jr. and former major leaguers Paul Phillips and Jonathan Herrera, the 8-run 14-hit attack had the Sky Sox in line for the win, but Matt Wilhite (0-2, 4.13)   couldn't shut the door.  He faced six hitters, getting only one out (on a bunt), allowing the other five to score, the last three on a Randy Ruiz walk-off home run.
Adam Eaton (3-2, 2.30) faces T.J. (don't call me Jim) Beam (4-2, 4.59) of the 51s tonight at 7:05MDT.

Tulsa was buzzing last night, but it had nothing to do with the Driller's 6th win in 7 games.  Or the fact that Tulsa eeked out a 1-0 win in a pitcher's duel against the first half Texas League champion Springfield Cardinals.  Or that the starting pitching matchup lived up to the ballyhooed billing.  After throwing just nine pitches in a perfect first inning, Jhoulys Chacin (8-6, 3.14) left under mysterious circumstances.  Turns out Chacin was called up to the majors.  Chacin's career stats below.

Tulsa used four relievers to polish off the three-hit shutout over big right hander Lance Lynn (9-3, 3.22).  The only run of the game came when leadoff hitter Anthony Jackson doubled in the sixth to score Rex Rundgren, who had singled.  The teams boast another flashy pitching matchup tonight at 6:05 MDT when Samuel Deduno (8-2, 2.41) faces Trey Hearne (10-2, 2.89)

The Nuts notched their fourth straight win by toppling the Stockton Ports (A's) in Stockton Wednesday night.  Home runs by Brian Rike (8) and Jason van Kooten (7) were enough for Kenny Durst (3-10, 5.31), who threw 5.1 innings allowing one run.  The bullpen held the Ports scoreless the rest of the way.  Wilin Rosario added two hits, including a double.  He managed just a .323 wOBA in June despite a .474 BABIP, yet in seeing that BABIP drop to .364 in July, his wOBA is .383 this month, so he's definitely figuring things out in Modesto after some serious growing pains.

Ethan Hollingsworth (5-6, 4.05) was beaten around for 5 runs in 5 innings, though he recorded 5 K's against the first half division champs, the Lakewood Blue Claws (Phillie).  Justin de Fratus (4-3, 3.67) handcuffed the Tourists all night - a Tyler Massey triple was the only extra base hit they managed all night, while the team struck out 10 times against zero walks.  Singles by Delta Cleary, David Christensen,  Ryan Peisel, Jordan Pacheco and Massey finished off the offense.

Hopefully the off-day will help the Ghosts get their swagger back.  After winning three of four, they've lost their last two.  They travel to Ogden to face the Raptors (Dodgers) at 8:00 MDT tonight.