Matt Cain and the Giants slay the unable Rockies, 3-1

Share All sharing options for: Matt Cain and the Giants slay the unable Rockies, 3-1

Fred Lewis gets on my nerves. Three for three a walk, a double, a triple, two runs scored. He now is nine for eighteen against the Rockies this season, against everybody else he hits .232. It's like when Pedro Feliz left the Giants he bestowed his Rockie slaying powers on Lewis. It must be an amulet or something. Nate Schierholtz hit a home run off of Jason Hammel. Matt Cain pitched well and Pablo Sandoval made a couple of nice plays to save him.

Ian Stewart looked good at the plate. Todd Helton was mostly patient. Garrett Atkins did come up with one big double in the sixth, but there was no follow through as Brad Hawpe struck out after him, everybody else on offense provided fodder for the lowlight reel. Pitching by Hammel and company was decent, holding the opposition to three runs at Coors Field is usually a recipe for success, tonight we ran into a Matt Cain sized wall. Rafael Betancourt made his debut appearance with the Rockies and pitched a scoreless ninth inning. The Rockies now find themselves at 52-44 and tied with the Giants for the wild card lead.

We need to come back and win these next two, as this sort of struggle could lead to a full blown slump pretty quickly. 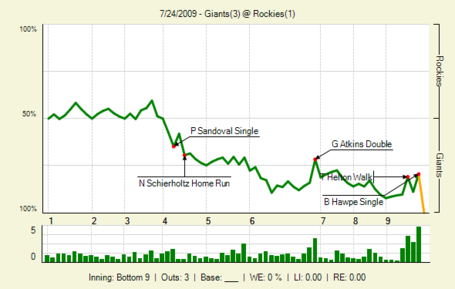