Share All sharing options for: Rockies 8, Giants 2: Rox polish off a different kind of perfect game

Clutch hitting.  A lot of runs.  The long ball.  Dominant pitching.  A much awaited strong debut from a top prospect.  Tacos.  What else can you want in a game?

It's nice not having to face Matt Cain at Coors Field.

The Rockies managed 5 more hits off of Jonathan Sanchez than the Padres did July 10, touching him up for 5 runs in his 5 innings.  Troy Tulowitzki was the offensive hero of the night, shrugging off immediately recent and season-long RISP issues to club a 3-run home run and an RBI double, providing Jorge de la Rosa (8-7, 4.78) a four run lead.

A sacrifice fly by Chris Iannetta (one of two towering fly balls he hit on the night) put the Giants in a 5-0 hole.  That was much more than de la Rosa would need, but Troy Tulowitzki and Chris Iannetta each drove in an insurance run in the eighth for their 5th and 2nd RBIs of the game, respectively.

De la Rosa retired the first 11 batters of the game, six via strikeout, on his way to a 7.1 inning, 2-run, 7-strikeout performance.  He did not walk a batter, and the second run did not come across until Fred Lewis grounded out off of Rafael Betancourt, scoring Randy Winn, who had tripled on DLR's 96th and final pitch.

The 8-2 margin allowed Jim Tracy to insert Jhoulys Chacin into his first major league game in the ninth.  It took him 22 pitches to get out of the inning, but he struck out two and induced a weak ground ball.   A seven pitch walk to Edgar Renteria was the only blemish.

Jorge's fifth consecutive quality start and sixth consecutive win gives him eight Ws and has him over .500 for the first time this season.  He's on pace for career highs in K's and wins, with a career low in ERA.  Not bad for a fifth starter.

Join after the jump for the fangraph and the roll call. 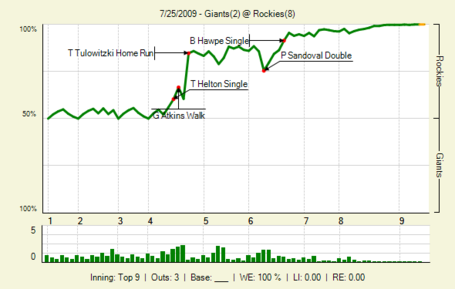