Aaron Cook pitched 7 very effective innings (and did so while throwing just 77 pitches), and Franklin Morales and Huston Street slammed the door on the Giants as the Rockies took the rubber match of a super-important three game series.

Cook, who allowed 2 runs on 9 hits (and no walks), won his 10th game of the season by getting the Giants to ground out 16 times, as opposed to only two flyball outs. Despite the low pitch count, Jim Tracy pulled him in favor of Morales to start the 8th inning because of the fact that two lefties were due up and all of them hit Cook well over the course of the game. Frankie responded by striking out two of the three batters, while firing fastballs upwards of 96 MPH, which is good to see. Huston Street then came on to earn his 25th save of the season by inducing a flyout, groundout, and strikeout.

Offensively, the Rockies didn't exactly put on a show, but they did get a few timely hits and executed well, overall. Every player in the starting lineup had a hit with the exception of Clint Barmes, and their patient approach paid off as they drew six walks (2 each by Troy Tulowitzki, who also produced a hit and a sac fly, and Seth Smith). Yorvit Torrealba had two hits and an RBI, and Ian Stewart and Brad Hawpe each had RBI singles for Colorado. 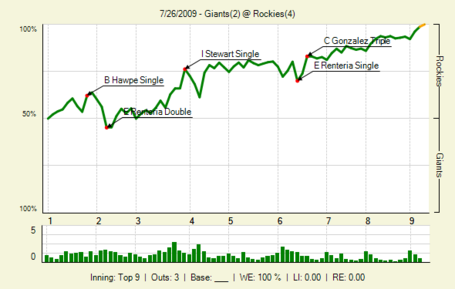 Tomorrow: The Rockies travel to New York to play their first series in Citi Field against the Mets. Ubaldo Jimenez goes for the Rox against Oliver Perez. Game time is 5:10 PM MT. GO ROCKIES!!!