Let that sink in a little bit. 2-18. That's more futility than the Nationals can muster anywhere, yet that's the Rockies' record visiting the Mets over the past six seasons. Just two measly wins. Last year was the height of it, where a Brad Hawpe solo home run was the lone run Colorado managed in the entire series. That is carnage right there. So ask me if I'm scared.

I'm not. Well, not really. That futile road record does give me pause, and it means a 4-game sweep will be incredibly difficult, but a series win shouldn't be ignored. There are five reasons to ignore the road record. 1) This ain't Shea Stadium anymore. Citi Field may treat the Rox better. 2) Colorado actually has the pitching advantage in the series, meaning we don't need to rely on the offense to crank it up as much on the road. 3) This Rockies team is a lot better than 5 of the 6 teams that contributed to that 2-18 mark, and arguably better than the 2007 NL Pennant team. 4) This may be the best road team the Rockies have ever had, both by personnel and results. And 5) We're not actually facing the Mets. Not really. 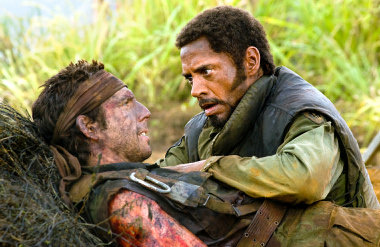 at Shea is the carnage in the Mets' training room. It has gotten so ridiculous, it's almost sadly comical - see right. Jerry Manuel has lost arguably his best starting outfield (not just outfielder), half his infield, his #2 starting pitcher and two critical bullpen cogs.

As much as I would love to revel in the 6.5 games the Rockies have buried the Mets since the curse of Kruk, I almost feel sorry for the Mets. It's better to be lucky than good sometimes, and that right there could be the biggest difference between the two teams.

Whereas New York has ten men on the DL right now, the Rox have placed only 5 7 main contributors all season, if memory serves - Taylor Buchholz, Alan Embree, Manuel Corpas, Chris Iannetta, Jeff Francis, Matt Daley and Franklin Morales. Luck may play a part of it, but however you slice it, the Rockies will be the far superior team at Citi Field this series.

The Mets are coming off two consecutive victories at Houston for their first series win of the second half. They have been in a freefall since June 25, just after Beltran went down, and just after the Curse of Kruk. Since that date, the Mets are 9-17. Despite some false hope for legitimizing a playoff run from some Mets fans, New York sits 7.5 behind the Rockies in the wild card, 10.5 behind the Phillies in the NL East. It's time to pack it in. And remember plenty of gauze.

The Mets are 25-20 at home, while the Rockies' 27-23 road mark is not far off that pace. Given that the Mets have the fourth worst run differential in the league, and it's only gotten worse since key injuries, it is reasonable to argue this team is among the worst in the National League, just one tier above San Diego and Washington.

Check out Amazin Avenue to see how many fans are in denial.

It is my pleasure to introduce the most punchless offense in the majors. With just 57 home runs (we have 113), New York checks in with the least power in the bigs. Their .388 SLG is only better than the threeuniversally regarded weakest MLB offenses - San Diego, San Friancisco and Oakland. However, their .323 wOBA beats out 11 teams on the strength of a respectable .340 OBP, which is one point below the Rox.

Fangraphs ranks them 20th in offense, but with the stopgaps in the lineup now, their clout takes a severe hit. Jerry Manuel has used 24 batters this season to the Rockies' 16. He must grit his teeth every time he's filling out the lineup card:

By wOBA metrics, the lineup features one All-Star caliber player (Wright), two solidly above average hitters (Pagan and Castillo), one very below average hitter (Schnieder), and four absolute terrible hitters (Murphy, Francoeur, Sullivan and Cora). Outside of the top three in the order, there is no legitimate threat in the lineup. Their clean-up hitter has a worse SLG and wOBA than Carlos Gonzalez! And Cory freaking Sullivan is hitting sixth...

Hop after the jump for the scouting report on the arms, the D, the pitching matchups and the hot/cold players.

This is probably the first time ever that the Mets have faced the Rockies with a higher staff ERA. They are 16th in MLB with a 4.34 mark. Their rotation ERA/FIP/tRA splits are 4.68/4.47/5.06, and for the bullpen: 3.69/4.23/4.62. They are prety much below average across the board. Johan Santana is fine, but the rest of the rotation is filled with castoffs, unproven youth and just bad pitchers. K-Rod is fine as the closer, but there's no real help otherwise. They are basically a two man staff.

By fangraphs values, the Mets' staff is ranked 23rd in overall value, 24th in the rotation and 22nd in the bullpen.

New York has made 62 errors, good for 11th in MLB. However, by UZR, they have the worst range in the majors, which fangraphs takes into account to claim the Mets are MLB's 2nd worst defense. David Wright has apparently cost the team the most runs defensively, while Angel Pagan is the only above average fielder. Apparently. Sullivan/Reed is a large defensive upgrade over Sheffield in left.

Citi Field has gotten a reputation as a pitchers' park, largely due to David Wright's pathetic total of 3 home dingers. A quick glance though shows the park to be pretty neutral. Baseball Reference gives it a flat 100 neutral rating for hitters, a 99 for pitchers. It is tied for 7th in ESPN's park factor in stifling offense, but also has the 12th highest HR factor, ahead of Coors Field. Blasphemy.

Ubaldo may be the only Rockies' starter below .500, but no one is confusing him for a week link. Oliver Perez has made only two quality starts all year and has otherwise been a time bomb. That K/BB rate is atrocious - in fact, it is worse than every pitcher in MLB except Dontrelle Willis and Daniel Cabrera. This game favors the Rockies in ridiculous fashion. To wit: they are a -159 moneyline bet, despite being on the road at a New York team. Favors: ROCKIES Very strongly

Pelfrey has been good vs the Rox in his career, especially in his strong start in 2008 at Shea. However, he's been unimpressive this season, especially after a good May. His ERA was over 5.90 in June and July, and the Mets have lost 7 of his last 10 starts. He faces the ultimate winner, who should be good to go after blister issues. Favors: ROCKIES moderately strongly

The Rockies win the series if they win this game. It's the only pitching matchup that favors the Mets, and even then it's not as stark of a difference as initially surmised. Hammel has an road ERA of 1.93 that is competitive with Santana's 1.83 at Citi Field. Jason Hammel's season FIP of 3.82 actually edges out Santana's 3.83. Then compare the offenses they have to face, and the game may be more competitive than advertised. The Mets have only won 4 of Santana's last 10 starts, he had a 6.19 ERA in June and is coming off a 12-hit barage at Houston, including a home run by the pitcher. This one is doable, people. Favors: METS moderately

Jorge is on some kind of roll, winning 8 of 9 decisions, including winning his last six starts, a franchise record. His FIP/tRA are a stellar 3.70/3.66. He'll face Niese, a young lefty, who was impressive Saturday in his first start since his callup. The Rockies are 15-14 vs lefties and haven't had trouble with young pitchers lately, so the old MO there is dissolving. The 2005 7th rounder was a Little League and high school teammate of Chad Billingsley. He was 5-6 with a 3.82 ERA in AAA before his callup. He throws a fastball in the upper 80's, compliments it with a ~88mph cutter, freqently mixes in a soft curve and has a changeup as well. It's a difficult game to handicap not seeing much of Niese at the MLB level, but the way DLR has been dealing in addition to the rather large offensive gap between the teams...Favors: ROCKIES moderately

If the Rockies win Wednesday, it will be difficult to lose the series. It will also be nearly impossible with a loss tonight. The Rockies' record at New York in years past is worrying enough, but winning 4 game series on the road as a rule is difficult, especially when Johan Santana is on the queue. I would take a 2-2 split of the series, but we're all hoping for a series win.

Francisco Rodriguez has been scored upon in 5 of his last 8 outings, giving up 3 HR in that span. Daniel Murphy is just 8-for-38 since the break, while Cory Sullivan, Alex Cora, Fernando Tatis, Jeremy Reed and Brian Scheider join him in hitting under .215 since July 15.

Gary Sheffield just joined 7 other teammates on the 15-day DL. The left-fielder was placed on the DL with a hamstring strain, retroactively to July 18. Joining him in the infirmary are Carlos Delgado (hip - 5/11), Jose Reyes (hamstring - 5/21), John Maine (shoulder - 6/7), Carlos Beltran (knee - 6/22) , Fernando Martinez (knee - 7/4), J.J. Putz (elbow - 6/5), and Fernando Nieve (thigh - 7/20). Ramon Martinez was moved to the 60day DL with a finger injury on June 3, joining Billy Wagner, who has been sidelined with an elbow injury since the beginning of the season.

I did an interview with Kerel Cooper from On The Black, a Mets video blog. Check out the interview here if you're interested in hearing me as a blubbering buffoon.