Well, the New York woes continue on for Colorado. Jason Marquis pitched well enough to win his 13th ballgame, but instead he came away with loss number 7 on the season, as the Rockies' offense wasn't able to get clicking in a shutout loss to the New York Mets. It was the first time the Rockies have been shutout since July 1st in Los Angeles.

Todd Helton continued his habit of hitting like a mad man in games following an off-day, but other than the Toddfather and red-hot Troy Tulowitzki, the Rockies weren't able to do much at the plate. Dexter Fowler, Seth Smith, and Ian Stewart each had a hit, but none of them were of the timely fashion, and key guys like Brad Hawpe (0-for-4) and Clint Barmes (0-for-3) were unable generate any offense whatsoever.

Marquis finished his night after throwing 6 innings of 3 run ball - only two of which were earned due to a Barmes error that allowed Daniel Murphy to reach third, then score on a Brian Schneider sacrfice fly. Jhoulys Chacin was good in his second career appearance, notching a strikeout (and a walk) in a scoreless 7th inning. Josh Fogg was wild in the 8th, and was lucky to get out of the inning only allowing one run.

Check out the graph, RowCall, and what to expect tomorrow after the jump... 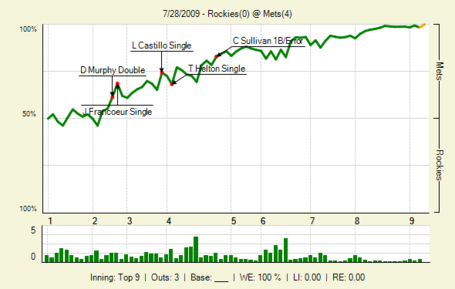 Tomorrow: The Mets have a definitive pitching advantage (even with Hammel starting on the road), as Johan Santana takes the mound looking for his 12th win. Same time, same place. Russ, do something to get these guys going will ya?