The contrast at Coors Field Friday night was pretty stark: one team with a purpose and a will to compete, the other looking like it just arrived for the Cactus League opener. Colorado Rockies fans will be grateful that their's was the team ready to play, and they took advantage of a gem of a performance from starter Jorge De La Rosa and several costly defensive miscues by the Arizona Diamondbacks in the course of winning 5-0. Ian Stewart hit his team leading 14th homerun, Todd Helton continued his remarkable return to form season with his 492nd career double, and Troy Tulowitzki and Chris Iannetta each had two hits, but what stood out was the complete breakdown of fundamental play by the opposition.  I think the Rockies would have won anyway the way De La Rosa was pitching, but it would be nice to give them no doubt of that fact.

The standings after everything plays out tonight (with the Giants and Dodgers winning easily so far) will likely not result in much of a shift, but I think us Rockies fans, so unused to winning this time of year, should recognize that the season's not even half over still. Be glad for where the team is at, playing at a high level and in a solid position to compete, that's more important right now than who's where on the wildcard totem pole. The team improves to 1-1 in the month of July and I'd like to see another run for twenty before things get trickier in August and September. 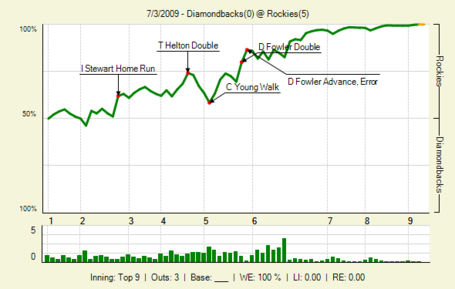