Share All sharing options for: Rockies split double header with Mets, look to regroup in Cincinnati

So we know that by the Sinatra Theorem that the Rockies probably can't make it anywhere, but can they at least make it in the places that matter?

So word tonight comes down that the Rockies aren't likely to make another move by the non-waiver trade deadline tomorrow afternoon. The team will be at most one game behind in the Wild Card standings pending tonight's Giants/Phillies game.

What happened in New York wasn't the Rockies getting exposed. It wasn't even a terribly large slump. It was randomness. Rockies pitchers ran into a bad team that had started playing well in Houston and carried it back home. For hitting, the Rockies had two key left handed hitters, Brad Hawpe and Ian Stewart, effectively neutralized by strong left handed pitching. At the same time, the team's two best right handed bench players used to pick up the load against LHP's, Ryan Spilborghs and Garrett Atkins, combined to go 2 for 24 with three walks. We might debate the abilities of Spilly and Atkins, but given platoon advantages, this kind of showing falls well below what should normally be expected from them.

If the woes continue in Cincinnati against a bad team that's been playing poorly,  then we might start to fidget a little bit. Right now, there's still little reason to suspect that any of the teams the Rockies are competing for a wild card spot against are actually better teams than the Rockies are. In the National League, only Philadelphia has made a real significant addition via trade. In short, August should prove at least as fruitful to the Rockies as July, a month, by the way, we could finish 15-11 in with a win over the Reds tomorrow.

So, Jason Hammel got whacked around in the top of the second and the Rockies were shut out 7-0 in the first game, Jorge De La Rosa used a big two run home run by Clint Barmes to support the 4-2 victory in the nightcap. The Rockies current record is: 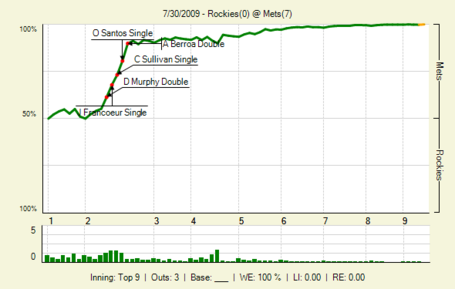 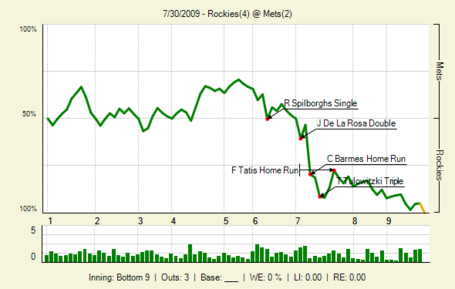