Independence Day just has the tendency of the dramatic.  Last year, the dramatics clearly favored the Rockies in epic fashion.  We may have used up all of our 4th of July karma for a while.

Behind a Clint Barmes home run (10) and RBI double (on a hit and run) and a 2RBI double by Ian Stewart, the Rockies were in control 4-0 after three innings.  Aaron Cook was on a roll, and the Rockies' rotation hadn't allowed more than four runs in their last five games.  Combined.   It looked good.

Then in the fourth, Aaron Cook's sinker started rising in the zone, and the Diamondbacks started hitting.  Cook left after five plus innings after diving for a chopper to his right.  The dive may have re-injured his back, so we'll want to monitor his status as more information comes available.  Cook fielded the chopper but threw errantly past Helton.  That led to Arizona's third run and a tenuous one run lead.

Three things then led to the unraveling of the loss:

1)  Poor defense.  Cook's error led to one unearned run.  Seth Smith misplayed a flyball in the ninth that led to another unearned run.  Two run swing.

2)  Plays at the plate:  There were two plays at the plate, and neither went in the Rockies favor.  Todd Helton was thrown out in the fifth inning on a throw that beat him by 15 feet.  On Chris Young's 3-run double, Troy Tulowitzki's relay throw beat Felipe Lopez by 15 feet as well.  Chris Iannetta may have had Helton's collision at the plate in his mind.  He braced for a collision and Lopez slid under the non existant tag.  Two run swing.

3.) Bullpen woes:  The normally dependable Joel Peralta (0-2, 5.06) blew up.  The righty allowed two walks and three hits while recording just one out, while all five runners scored.  The big blow was a 3-run double by Chris Young with a tie score after Peralta was already charged with a blown save.  Randy Flores came in and promptly gave up a 2-run shot to Stephen Drew to complete Arizona's 9-run unanswered run.  Arizona scored 8 runs on just 5 hits in the last two innings.  Perhaps we should not be so bullish on this bullpen.

Seth Smith further cemented his status as pinch-hitter extraordinaire with a 2RBI single on the only pitch he saw in the eighth, and Dexter Fowler followed with an RBI single, but the Independence Day magic fell short.  Ian Stewart, Brad Hawpe, Todd Helton and Clint Barmes all had 2-hit nights.  Box Score

Aaron Cook missed a chance to move into 2nd place in the NL with 9 wins with Peralta's blown save.  Rockies starters still have six straight games with 2 ER or less, yet the Rockies are only 3-3 in those games.

we have a bullpen problem

Join after the jump for a tough fangraph and the roll call. 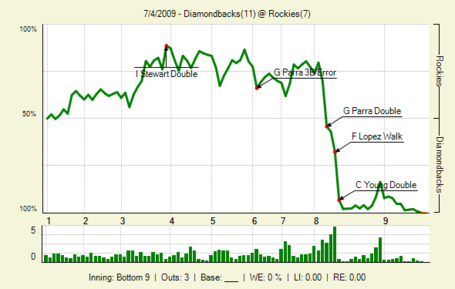