Diamondbacks 4, Rockies 3: Can we have a do-over please?

Share All sharing options for: Diamondbacks 4, Rockies 3: Can we have a do-over please?

It was a day pregnant with promise for the Colorado Rockies. They had gotten out to a three run lead on the Diamondbacks' All-Star starter, Dan Haren, and their hurler, Ubaldo Jimenez had no-hit Arizona through 5.2 IP. And then it all fell apart.

Jimenez (6-8) walked two batters with two outs in the sixth, then Mark Reynolds whacked a three-run homer to tie up the ballgame. With his pitcher having thrown 101 pitches through six, Jim Tracy sent Ubaldo back out in the seventh inning, whereupon Jimenez promptly gave up the go-ahead run on a one-out Felipe Lopez single--a run that would provide the final tally in a 4-3 Rockies defeat. Haren (8-5) ended up with the win and Chad Qualls got the save (15).

Arizona only mustered four hits on the day but really made them count. Jimenez and Co. helped by giving six Snakes a free pass. In addition, credit is due to Arizona's bullpen, who shut down the Rockies to the tune of three scoreless innings, allowing only one hit.

On the plus side, the Rockies' bullpen was equally solid in their 2.2 IP. In the end though, the Rockies just could not generate any offense at a time when it was critically needed.

It was truly a frustrating loss for Colorado, who end the first half of their schedule with a 42-39 record. Looking back to when the Rockies were 20-32, we'd have killed for this record, so let's keep that in mind.

Read on if you must to see the gloomy graph... 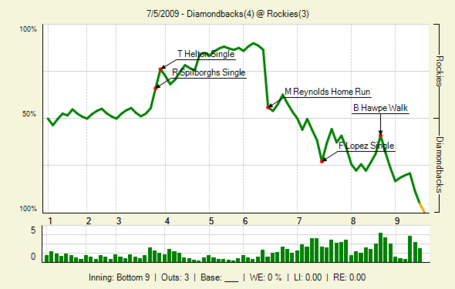