Rockies 1, Nationals 0: Rockies win a game of the National(s) pastime

Share All sharing options for: Rockies 1, Nationals 0: Rockies win a game of the National(s) pastime

Isn't everything great after a Rockies win? Jason Marquis picked up his (league-leading) 11th win; Huston Street notched his 20th save; and the Rockies won a 1-0 game. At home. You know, Coors Field.

So, how does a team win 1-0 at Coors Field? The simple answer is, play the Nationals. The more involved answer is, play the Nationals. Seriously, the Nats were 2-7 with runners in scoring position and failed to score a run. Thank you very much Jason Marquis for a strong eight innings of no-run ball. The guy came up best when it counted the most. Look at his last two innings. In the seventh, he allowed a double and single before the first out ocurred. Then a single loaded the bases. With a leverage index (LI) of 4.69 on the next batter, Marquis induced a ground out. Moving to the eighth, Marquis faced a similar situation with the bases loaded and two outs this time. The LI for that situation was 6.86 and he got a fly out. Dude's banging--dude's an All-Star. And after 104 pitches for Marquis, Huston Street entered and sealed the deal.

The Rockies, though, were 0-7 with runners in scoring position and scored the lone run of the game in the first inning on a Todd Helton double with Clint Barmes on first base.

The WPA graph and Row Call after the jump. 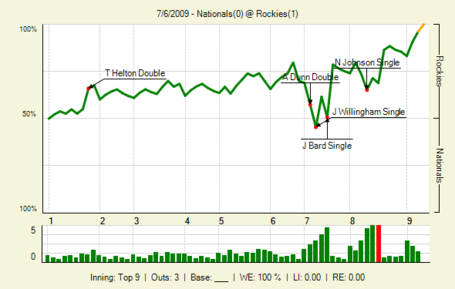