To quote the great Drew Goodman: "And you wonder why the Nationals have only won 24 games."

A Joe Beimel throwing error on what would probably would have been a double play to end the 8th inning proved costly for Washington (and lucky for Colorado), as the Rockies capped a four-run rally to win 5-4. It wasn't the first of the shenanigans for the Nationals either, as Willie Harris took a grounder off the no-no's, instead of into the glove, that would have ended the 4th inning but instead scored Ian Stewart and eventually allowed the Rox to tie the game following a Clint Barmes RBI single.

Colorado jumped on Washington rookie Jordan Zimmermann early, as Brad Hawpe picked up an RBI single in the 1st, but Josh Willingham tied the game in the next inning with a long solo blast off of Jason Hammel. Then, Hammel got himself into some trouble in the third and ended up allowing a three-run bomb to Ryan Zimmerman that gave the Nats a 4-1 lead. However, Hammel and the Rockies' bullpen were able to keep DC at bay and gave the offense a chance to claw back into the game.

Franklin Morales made his first career relief appearance, notching a big strikeout of Nyjer Morgan to end a scoring opportunity in the 6th inning. After allowing the first two batters to reach in the next inning (one by virtue of a Troy Tulowitzki error), Morales was able to punch out Adam Dunn before exiting in favor of Juan Rincon, who got the Rockies out of another mess. In the top of the 8th, Alan Embree came on in relief of Joel Peralta and promptly picked off Austin Kearns at first base, and effectively "earned" the win without having to throw a single pitch because of the events that unfolded in the bottom half of the inning. Huston Street continued to mow down opponents, striking out Zimmerman for the final out of the game and earning his 21st save. 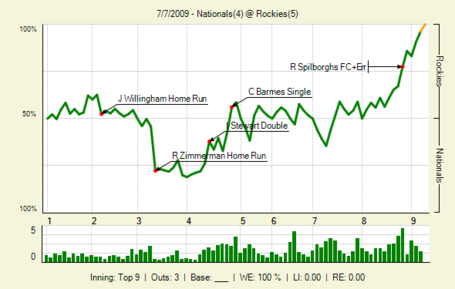