Share All sharing options for: Garrett Atkins rallies Rockies to win over Braves

Garrett Atkins' two run, pinch hit double with two outs in the eighth inning carried the Rockies to a big 7-6 win in the opening game of their four game series against the Braves.

The Rockies battled from behind most of the game, as starter Aaron Cook struggled to keep his sinker down for the second straight start and surrendered five Atlanta runs in just over five innings of work.

Rockies relievers and the offense had his back, however, as the team rallied to tie the game three times before Atkins' double gave them their first lead of the night. Ian Stewart hit a two run home run in the second and also walked three times.

Chris Iannetta went two for three and hit a two run triple to tie the game a second time in the fourth, and then Dexter Fowler and Clint Barmes, who each also had two hits, combined for the Rockies fifth run in the seventh inning.

Kudos to the bullpen, Franklin Morales, Alan Embree, Juan Rincon, Joel Peralta and Huston Street did a fine job picking up for Cook.

With the victory, the Rockies improve to 46-39. 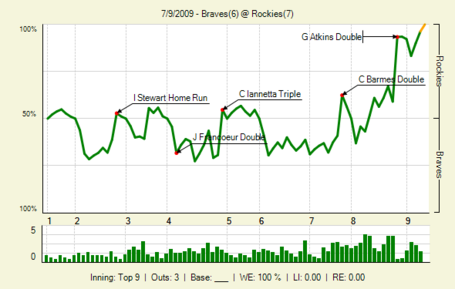 Pretty massive pair of threads, over 1400 comments and 42 users. Thank you!

I’m sorry for everything mean I said about you!

I take it all back!