Rockies 8, Mets 3: Bats come alive and the bullpen holds serve as the Rox snap their skid

Share All sharing options for: Rockies 8, Mets 3: Bats come alive and the bullpen holds serve as the Rox snap their skid

Todd Helton and Carlos Gonzalez each went deep, while Helton (2-for-4) was joined by Seth Smith 3-for-4) and Garrett Atkins (2-for-3) in the multi-hit game club as the Rockies got off on the right foot to begin the home stand, winning 8-3 over the New York Mets. The victory, coupled with San Francisco's loss at Philadelphia, put the Rockies back on top in the National League Wildcard standings.

Following a rough first inning in which he allowed two runs on three hits and a walk, Jorge De La Rosa (13-9) rebounded and ended up turning in a strong performance, going six innings and allowing only four hits while punching out six - the last of which set the all-time record for strikeouts in a single season at Coors Field (96 - breaking the mark previously held by Pedro Astacio). JDLR had some command issues throughout the night (throwing just half of his 100 pitches for strikes), but he was able to battle through it. Matt Daley allowed consecutive triples in the seventh that cut into the Rockies' lead, but recovered to retire Luis Castillo on a weak grounder and Dark Helmet David Wright via strikeout. Rafael Betancourt and Huston Street did not allow a hit in the eighth and ninth innings, respectively.

In addition to his two base hits, Garrett Atkins drew a bases loaded walk to get the Rox on the board in the bottom of the first. Then in the second inning, Carlos Gonzalez launched a two-run bomb (9) into the upper deck in right field to give Colorado a lead which they wouldn't relinquish. To add some insurance, Todd Helton deposited a first-pitch offering from Mike Pelfrey into the right field seats for three-run home run (14), effectively giving Rockies fans all over the Denver area cheap tacos.

Also of note, newly-acquired Jason Giambi made his Rockies debut in the bottom of the seventh inning as he pinch hit for Matt Daley. Fittingly, he earned the run back that Daley allowed by walking in Atkins.

Check out the WPA graph, RowCall, and tomorrow's starters after the jump. 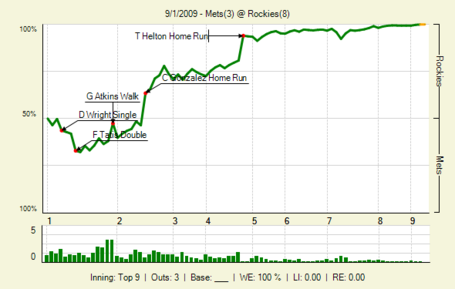