The Colorado Rockies rallied to score five runs with two outs off of Kip Wells in the third inning on Thursday afternoon and wound up beating the Cincinnati Reds, 5-1 and improve to 81-60 on the season. With the win, the Rockies draw within two games of the idle Dodgers and move 4.5 games ahead of San Francisco in the NL wild-card chase. The Rockies dominated three of the National Leagues trailing teams during their just completed homestand, finishing 9-1, including sweeps over Cincinnati and Arizona.

After Clint Barmes singled but was thrown out by Jonny Gomes trying to stretch the hit into a double, and Jose Contreras strained his right quadriceps while running to first on a groundball to shortstop, the next five Rockies reached base safely, culminating with Garrett Atkins two run home run before Brad Hawpe broke the string. Eric Young Jr. started the rally with a bunt single and stole second for the second time in the game. Carlos Gonzalez walked and was moved to third when Seth Smith singled in Young on a hanging change-up from Reds starter Wells. Both Gonzalez and Smith scored when Reds center fielder Drew Stubbs couldn't quite catch up to a deep fly ball by Jason Giambi, a missed opportunity to get out of the inning that would get exacerbated moments later when Garrett Atkins launched his ninth homerun of the season.

Jhoulys Chacin, Juan Rincon and Matt Belisle picked up for Contreras by keeping the Reds scoreless for six innings after he left, with Rincon pitching three shutout innings and striking out five to earn the win. With several starters (Contreras, Aaron Cook and Ubaldo Jimenez) going through injury issues, keeping up the winning ways on the nine game road trip that the Rockies start tomorrow night in San Diego might prove difficult, but the Rockies have built themselves a buffer over their wild card competition with the strong homestand. 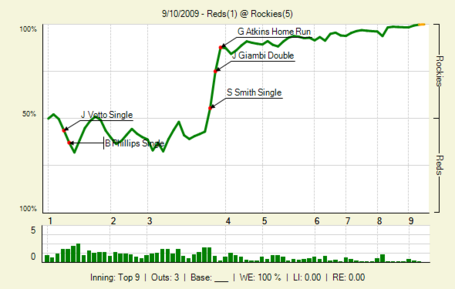