Yorvit Torrealba's bases loaded heroics saved the night for the Colorado Rockies, as the streaking catcher continued a torrid month with a three run double off of Padres closer Heath Bell with two outs in the top of the ninth inning on Friday night to keep Colorado's win streak alive.

The Colorado Rockies got the kind of start they needed from Jorge De La Rosa after one shaky first inning, but nonetheless their offense failed to materialize as the San Diego Padres capitalized on a first inning walked in run and an effective performance from starter Edward Mujica and a handful of relievers to take a 1-0 lead on Friday night and for most of the game, it appeared they were on their way to victory. The Padres scored their run when De La Rosa loaded the bases following a one out David Eckstein double by walking Adrian Gonzalez and allowing a single to Chase Headley. JDLR then walked Oscar Salazar to push Eckstein home before regaining his composure and more or less cruising through the next six innings of his start.

The Rockies best chance to score before the ninth inning rally came when they loaded the bases with one out in the seventh inning. In the seventh inning when Todd Helton got hit by a pitch to lead off the inning and moved to third one out later when Brad Hawpe doubled. With runners in scoring position, Garrett Atkins popped out to first. Seth Smith pinch hit for Clint Barmes and was intentionally walked bringing Ryan Spilborghs (pinch hitting for Chris Iannetta) to the plate with the bases loaded and two outs. Spilborghs struck out swinging to end the threat.

In the ninth, Helton walked, Hawpe singled with one out and pinch hitter Jason Giambi also walked to load the bases for Colorado. Heath Bell struck out Matt Murton, but Torrealba came through with the bases clearing double that would give Colorado a 3-1 lead. A single by Paul Phillips scored Torrealba and pushed the lead to 4-1. Franklin Morales came on to pitch a scoreless ninth inning for the save.

With the win Colorado improved to 82-60 on the season and stayed two games behind the Dodgers, while expanding their lead over their closest competitors in the N.L wild card chase as both Florida and San Francisco lost.

Row Call and graph after the jump. 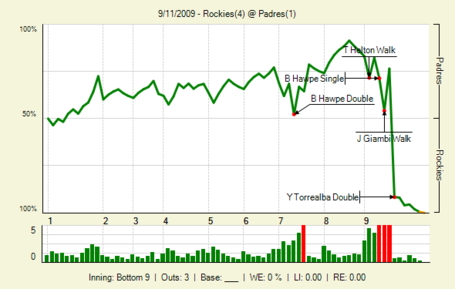