The Rockies have won in dramatic fashion of late, a walk-off win here, a come-from-behind victory there.  It was only a matter of time before Colorado was victim of the same.  Franklin Morales (3-1, 2.75) gave up an infield single in the bottom of the tenth, then walked three straight batters for his first loss of the season.  By the way, his name anagrams to "Minor Flake - Snarl."

The walk-off win - literally - was fitting for a game in which hits were at a premium.  The teams went 11-for-64 (.172) in the game.  Barring a reliever losing control, this game had the feeling of a late-inning marathon, but Morales' 18 pitch effort (only for five strikes) proved to be the elixir to chase away insomnia at PetCo again.

Still, even in a game the Rockies lost (and they do lose games from time to time), they completed a dramatic comeback.  Troy Tulowitzki hit a solo home run in the sixth to halve the deficit.  In the ninth inning, Brad Hawpe blooped a single and was replaced by Dexter Fowler on the bases, who promptly stole second before Yorvit Torrealba singled on a grounder off the mound up the middle, scoring Fowler and tying the game.  It was Heath Bell's second blown save in as many days, both off hits by Torrealba.  Bell had not blown a save at PetCo Park until this weekend.

Esmil Rogers was impressive in his MLB debut, allowing two runs on three hits and two walks in four innings, striking out four by tossing 80 pitches.  Everth Cabrera led off the bottom of the first with a 30-foot swinging bunt for a single.  With the speedy Rockie on first, the unnerved Rogers walked David Eckstein.  Adrian Gonzalez drove in Cabrera with a single, followed by a sac fly from Chase Headley, both on flat elevated fastballs.  Then Rogers put his foot down.

Rogers permitted just a leadoff single from Henry Blanco and a walk to pitcher Tim Stauffer in his last 3.2 IP, highlighted by a perfectly painted 94mph fastball on the corner for a strikeout of Oscar Salazar.  He retired the last seven men he faced.  If not for that cheap Cabrera hit, that complexion of that first inning completely changed, and Rogers might have been unscored upon.  He was quoted after the game as having had confidence issues with his breaking ball in the first inning, which he regained in the second.  That confidence was palpable, as Rogers exhibited a notable swagger on the mound.

Aside from Morales, the Rockies' bullpen was very strong.  Matt Belisle, Randy Flores, Matt Daley, Joe Beimel and Rafael Betancourt threw five scoreless innings, while an Adrian Gonzalez single off Belisle in the sixth represented the only baserunner the Padres managed in innings 5-9.

The Rockies offense was decent considering the smothering confines of PetCo, which is fitting given "Rockies offense" anagrams to "Fierceness of OK."  Yorvit Torrealba broke up Tim Stauffer's no-hitter in the fifth inning, but several Rockies - including Tulowitzki, Fowler, Jason Giambi and Ian Stewart - retreated to the dugout after deep flyballs that would have been home runs in a fair major league park.

This one hurts, especially given the effort of the bullpen, the gutsy performance of Esmil Rogers and the perpetual resiliancy of the offense in late innings.  What is important to remember though, is that this game was San Diego's most winnable game of the series, and the Rockies will be heavily favored tomorrow.  What's also important to remember is the Giants lost again tonight, keeping the Rockies 5.5 games ahead in the wild card chase.

Join after the jump for the  fangraph and the row call. 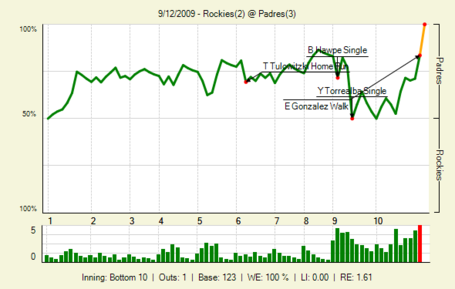