Remain Calm. ALL IS WELL. Seriously.

Well, it would have been nice to have come out of San Diego with a road series win, but to be honest, in no way was it an absolute necessity. With all the pessimism (and yes, some of it was warranted) in today's game thread, you would have never guessed that the Rockies were still securely in line for a playoff spot and maybe the division title.

Even with the Giants defeating the Dodgers today, the Rockies still hold a 4.5 game lead in the NL Wild Card Standings and are 3 games back of LA for the division. Colorado has been playing VERY well of late, and a two game losing streak was bound to happen sometime. Any result other than a series sweep on the road against San Francisco will keep the postseason firmly in the Rockies' grasp, and even if that unfortunate eventuality comes to pass the Rockies will still have a 1.5 game lead.

What does worry me is the Rockies' performance against left-handed starting pitching. As I mentioned at the top of the game thread, I believe that Tracy (and the Colorado organization in general) is too much of a slave to platoon splits, getting inferior bats into the lineup and hurting its rhythm and flow. All things considered though, the Rockies are still in good shape going forward.

As for the game, Jason Marquis struggled with his control a bit, giving up eight hits, four walks (including one of the bases loaded variety), and five runs in 5.2 IP. The worst of it was the sixth inning, in which the Padres used four walks and two hits to score three runs and go up 5-3.

The Rockies offense today consisted mostly of one Garrett Atkins two run triple in the third (he then scored on an RBI groundout by Ryan Spilborghs). The Rockies managed six hits, but left a small village on the basepaths and couldn't capitalize on the six walks they drew.

Was it a frustrating game? Yes it was. But it was NOT a huge blow to the Rockies' playoff chances (they were at 94% this morning and they won't move much after today's games) going forward. 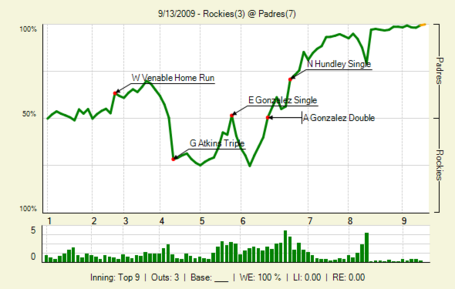