Tim Lincecum showed that his back was healthy, striking out eleven Rockies on the way to an easy win for the San Francisco Giants. The Rockies, meanwhile, must regroup and figure out a way to beat a team that has had all the answers against them lately as they continue the final three game set against San Francisco on Tuesday.

Jason Hammel gave up four runs, three in the second when the Giants strung together four straight singles to start the inning and later added a sacrifice fly, and the fourth run in the third inning when Bengie Molina hit a solo homerun.

The Giants fifth run scored thanks to a Juan Uribe single off Juan Rincon in the bottom of the eighth. A few hitters and a couple of relievers later in the same inning, Joel Peralta walked pinch hitter Fred Lewis with the bases loaded to score the Giants sixth run and then Eugenio Velez stabbed the Rockies with a grenade by hitting a bases clearing triple to increase the margin to the final score, 9-1.

The Rockies only run scored when Carlos Gonzalez tripled off of Lincecum with two outs in the seventh inning. A ball four pitch to Todd Helton that got past Bengie Molina and rolled to the backstop allowed Gonzalez to score from third.

The Giants close to within 3.5 games of the Rockies in the wild card chase with the win. 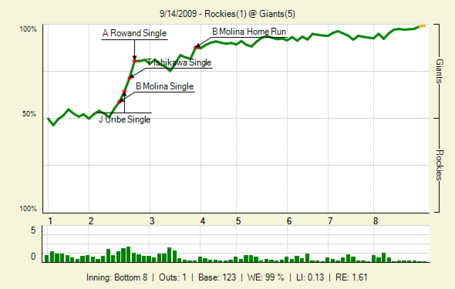