Giants 10, Rockies 2: Another blowout by the bay inches SF closer to Wildcard

Share All sharing options for: Giants 10, Rockies 2: Another blowout by the bay inches SF closer to Wildcard

Much of what has plagued the Rockies over the past couple of days reared its ugly head again tonight, and probably to an even greater extent. Colorado struck out nine more times and failed to get much of anything going on offense on their way to another bad loss at AT&T Park, a place where they've never fared well. As a result, the Giants creeped (literally - I mean, they did employ this guy for several years) to within 2.5 games of the Rockies in the NL Wildcard race.

Barry Zito baffled the Rockies once again, as the guy who is not known for his ability to get a punch out K'd nine hitters in seven innings. Meanwhile, despite racking up his own fair share of strikeouts (six in just 2.2 innings), Ubaldo Jimenez failed to step up when his club needed him to do so, allowing SEVEN runs on six hits and a couple of walks. Jimenez was doing alright velocity-wise, but left far too many pitches over the heart of the plate. The Giants, who seem to adjust very well, made him pay for it while the Rockies, who do NOT adjust well, continued to struggle against the soft-tossing Zito. Todd Helton had a rare awful night, going 0-for-3 with 3 backwards K's. Granted, not many other guys fared well, either, outside of Dexter Fowler, who had a couple of hits and reached on a walk, plus played some outstanding centerfield defense. Troy Tulowitzki hit his 26th home run of the year, as he was finally able to breakthrough against Zito. Matt Herges pitched two scoreless innings of relief, effectively keeping the Rox within eight runs.

Oh, and I hate Juan Uribe.

Stick around after the jump, if you dare, to see a win probability graph that closely resembles my blood pressure during the early stages of this game, RowCall, and tomorrow's starters. 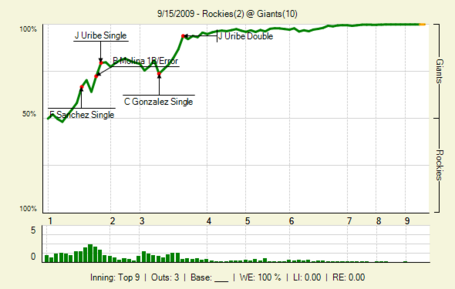 Tomorrow: Jorge De La Rosa (14-9, 4.37) vs. Matt Cain (13-5, 2.61)...same time, same place. ESPN will also have coverage of the game for those of you who are not in either team's TV market, as stated earlier. I, for one, am sick of watching Alanna Rizzo interview other teams' players after the game. We need a win damn it - be agressive, be confident, and just WIN, ROCKIES!