HUGE, HUGE, HUGE. What a game! If you weren't having a heart attack during the bottom of the ninth, well, you're made than stronger stuff than most of us.

This one was all about Jorge De La Rosa. What Ubaldo Jimenez didn't do last night, De La Rosa did tonight. He stopped the bleeding. He took control of those high-pressure situations and did not meltdown. Look at the sixth inning. A walk and a single started the inning. A wild pitch placed the runners on second and third. Strikeout. Strikeout. Strikeout. DLR took care of business. He allowed only three hits in eight innings and struck out nine.

But after eight brilliant innings, DLR's time was up. Franklin Morales came in over Rafael Betancourt and proceeded to allow a run on three hits. Betancourt entered and then a Tulo-to-Barmes exchange failed and led to a second run. Nerve-racking. Another run scored. Rafael Betancourt, however, held it together and sealed the deal. The Rockies leave San Francisco with a victory.

bar none considering the pressure, the need, the setting.

He [De La Rosa] is hitting every spot, setting these guys up with beauty. Simply a thing of beauty

Not even a full game of the Rockies made it onto ESPN tonight. Those Angels and Red Sox had to take their sweet time to finish that game, ending during the fifth inning of the Rockies-Giants contest. But, hey, WNBA on ESPN2 . . . yeah, no. 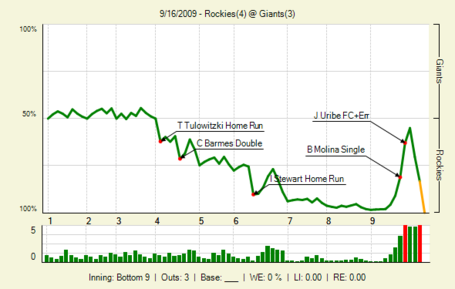