Share All sharing options for: Veteran letdown leads to meltdown for Rockies; Jason Marquis and Brad Hawpe let D-backs come back to win

So you would think in a playoff drive that the players who have been there and around the block would be the ones to step up and carry the team when it needs them the most. This proved not the case on Friday night as the Colorado Rockies lost 7-5 to the Diamondbacks thanks in large part to the inability of the veteran leadership of the team to step up.

Jason Marquis, who has been struggling throughout September was staked to a 4-1 lead after Yorvit Torrealba hit a two out, bases loaded single in the first inning to score two runs and a two run home run by Troy Tulowitzki two innings later. It wasn't enough. Marquis let Arizona right back into the game with the major blow coming in the form of rookie Brandon Allen's two run shot in the fourth inning to tie it at four.

Still, the game's all even and there would be plenty of opportunity for the Rockies to mount another rally as long as they played tight defense and held the line. This too, did not happen. Brad Hawpe missed a catch off his glove on a Gerardo Parra fly that resulted in a two run double in the seventh inning. Matt Belisle would come on an inning later to give up a solo home-run. Hawpe tried to redeem himself somewhat in the ninth by collecting his third walk of the game and after singles by Torrealba and Ian Stewart he scored the Rockies fifth run before Juan Gutierrez struck out Jason Giambi, Garrett Atkins and induced a pop-up from Carlos Gonzalez to end the inning with no further damage done.

Right now it seems like Torrealba's the only player of the older group that's stepping up during the stretch run offensively, none of them are on defense. If you look at the Rockies September statisitics, you can see that the players that Jim Tracy is relying most heavily upon are for the most part not getting the job done at the plate. Over this road trip we've also seen key defensive miscues by Clint Barmes, Garrett Atkins and now Hawpe that have resulted in multiple runs. I'm not sure where they're going to try pushing the blame for tonight's game, but the Rockies are fundamentally inept of late and it's the team's player leadership that's mostly responsible. We don't want them to press to make things worse, but there's got to be a shift back to basic, sound defensive baseball and soon if the Rockies hope to maintain their now dwindling wild card lead. 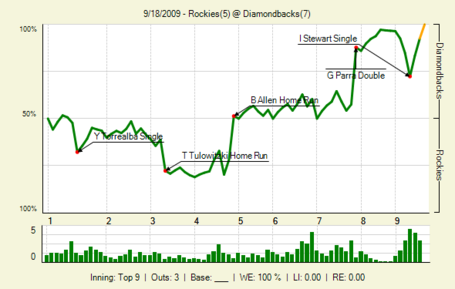