The Mets really are the cure for what ails you. Well, at least temporarily. As it stands, the Rockies have taken the first two games from the Metropolitans and look poised for the sweep tomorrow afternoon.

Jason Giambi made the most of his pinch-hit appearance by knocking in two runs in the bottom of the eighth to break a 2-2 tie. At the same time, let's not overlook Ubaldo Jimenez's solid, solid effort over eight innings. His .342 WPA was tops for the game.

Jimenez picked up his 13th win of the season, making him the third Rockies' pitcher to reach that plateau. Jorge De La Rosa has 13 and Jason Marquis leads the staff with 14. Back in February, who thought those two would have the top win totals on the team?

More after the jump. 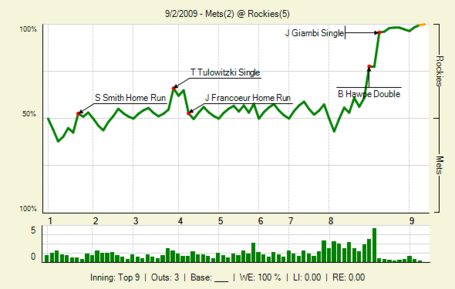