It was a matchup of stud pitchers.  Both showed why they are so studly, but both were also very shaky, though at different times.

The first time through the lineup, Ubaldo Jimenez gave up one run four hits and a walk, striking out no one.  An RBI single by Dan Haren gave Arizona a 1-0 lead in the second inning.  That's when Ubaldo the Ace showed up.  He struck out Chris Young and Justin Upton around a Stephen Drew walk, part of a string of AB's that saw 7 of 8 hitters D-Backs grab pine after striking out.  The Upton strikeout started a string of 13 consecutive batters retired by Jimenez.

Dan Haren's start was completely the opposite.  The Arizona ace retired the firs 12 batters he faced, striking out four straight and five total through four innings.  However, the Rockies started to chip away at Haren, showing slightly better results each inning.

In the fourth, Colorado managed not to strike out once.  In the fifth, Jason Giambi broke up the perfect game with a single before a Ryan Spilborghs double play.  In the sixth, the Rockies drew their first walk, followed by an infield hit by Clint Barmes, marking the first time two baserunners reached base in an inning.

The initially innocent tapping finally broke through the dam in the seventh.  Troy Tulowitzki led off with a single up the middle and advanced to second after Brandon Allen failed to scoop Stephen Drew's throw in the dirt.  After Jason Giambi struck out, Ryan Spilborghs, Yorvit Torrealba and Ian Stewart singled to give the Rockies the lead.  Jim Tracy then used Dan Haren's control against him in calling for a surprising suicide squeeze, surprising given Clint Barmes' difficulty with contact and Yorvit Torrealba's "speed" at third.

Troy Tulowitzki failed to hit a HR for the first time in five games, but Jason Giambi ensured the Rockies have at least one guy with a HR streak, bashing a 2-run HR off Haren in the eighth inning.

In recap of Haren's start:

It is good to see adjustments being made against a top flight pitcher.  Meanwhile, Jimenez finished the game having thrown 7 IP, allowing 1 run on 5 hits and three walks, striking out eight.  For a guy that had difficulty locating his offspeed pitches early, that is a fantastic ace-type line.

that was, after a rocky start, an ace performance. Now get an ice bag on that arm, man, we need you in 5 days.

The Giants, Marlins and Braves all lost today, so the Rockies' playoff chances strengthened as much as mathematically possible today.

Join after the jump for the burst dam fangraph and the row call. 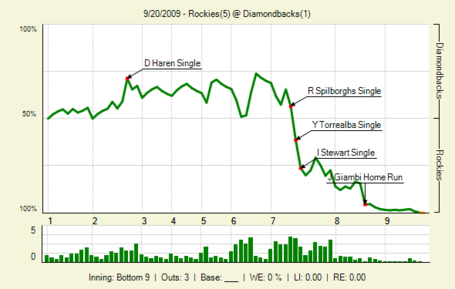