Share All sharing options for: Rockies 11, Padres 10: Well, that was interesting...

I must be bad luck. The moment I turned on the game, Juan Rincon began walking the entire San Diego roster and Franklin Morales couldn't get the third out to save his life. BUT, right when I turned off the game, Morales (apparently) induced a game-ending flyout and the Rockies held on to beat the scrappy Padres 11-10.

There was a lot of bad news in this game, especially for being one which the Rox came out on top. Jorge De La Rosa turned in a bit of a stinker, lasting just 2.1 innings and allowing six runs on six hits and three walks, while constantly searching for the strike zone. Carlos Gonzalez left in the second inning with hamstring tightness. Those, combined with the follies of two key relievers listed above, and there is some cause for concern.

However, the Rockies had their share of good fortune in this game as well. Brad Hawpe and Clint Barmes each showed signs of breaking out of their extended slumps. Hawpe hit a three run homer and walked a couple of times, and Barmes went 3-for-4, including an inside-the-park home run. In addition, Huston Street recorded two scoreless outs in the seventh, including a strike out. All in all, it seems to be a good night for the Rox, who have a good chance of taking a five game lead in the NL Wild Card standings, as San Francisco currently trails Arizona late in their game (although the D-Backs started the ninth inning roughly, a la Colorado...looks like I need to stop watching this game, too). lost to the D-Backs.

Continue after the jump for the win probability graph, Row Call, and tomorrow's starters... 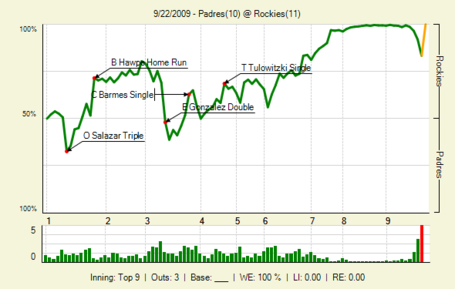 Great job tonight, everybody!!! Thanks, PR staff, for hanging out.