If there's anything to learn from tonight, it's that discussing history is more fun than following a game the Rockies wind up losing.

So, Jim Tracy used seven pitchers in the game. Jason Marquis started and allowed six runs in 4 2/3 innings. Six more pitchers entered the game after that and allowed a total of one hit. Bud Black had Tim Stauffer go 4 2/3 innings, who allowed two runs. He also didn't allow any hits until the fifth inning. You know, Tim Stauffer. Both starters walked five batters.

Oh, and I dislike Will Venable after his solo home run, three-run double night to put the Rockies to rest.

It's a loss. Play ball tomorrow. 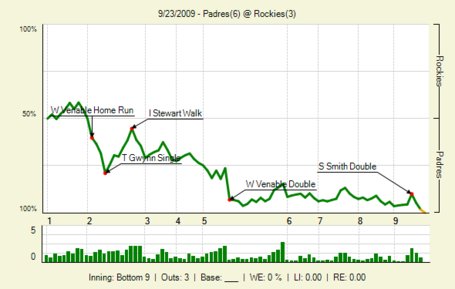