Going up against a bona fide ace, the Cardinals Chris Carpenter, with a potential playoff spot still hanging in the balance, the Colorado Rockies came through with gutsy, gritty 2-1 victory on Friday night, just when they needed it.

The Rockies used two sacrifice flies, one by Todd Helton in the first inning to score Carlos Gonzalez, and a walk off fly to right field by Yorvit Torrealba in the bottom of the ninth to score Tory Tulowitzki to do their scoring. Meanwhile, the Cardinals got their only run when Jose Contreras left a mistake pitch up in the strike zone to Ryan Ludwick resulting in a solo home run. Other than that, mistakes by the Rockies players were few and far between.

Aaron Cook got things off on the right foot by pitching five scoreless innings, with an effective, devastating sinker that hasn't always been there for him in 2009 before giving way to Contreras. Contreras breezed through the harder part of St. Louis' lineup, striking out the side in the sixth, including Albert Pujols while giving up just a Matt Holliday single before getting hit hard by Ludwick in the seventh. Rafael Betancourt and Huston Street added scoreless innings (albeit with some drama in Betancourt's eighth before he induced a Matt Holliday double play to end it) to preserve the tie and set the stage for the Rockies walk off win.

Helton led off the bottom of the ninth with a walk against left hander Trever Miller, but was forced out at second on a Tulowitzki groundout. Jason Giambi with better hitting of late pinch hit for Brad Hawpe and came through with a single to push Tulowitzki to third (don't underplay his heads up baserunning to move up the extra base) which allowed Torrealba the chance to be the hero once again with the game winning RBI.

The Rockies are now 5-0 against the Cardinals this season.

With eight games left for the Rockies and nine for the Braves, Atlanta still has to come up with four more wins than Colorado does the rest of the way to force a tie. Not that we want it to come to this, but a 3-5 record for the remaining eight games would require the Braves to finish 8-2 (7-2 in their regularly scheduled games plus the play-in) to overtake us. The Rockies magic number to clinch a playoff spot has dropped to six. Not to give too much fodder to the sky is falling crowd, but 3.5 games was the precise advantage that San Diego had on the Rockies after the games on Friday, September 21, 2007.

There were a couple of key distinctions, however. Because of game 163, the Rockies and Padres had 19 total games (10 for the Padres, 9 for the Rockies) left to play rather than the 17 now (hopefully) left for the Braves and Rox. When you push it forward to the Saturday standings and 17 total games left, the Rockies had already cut the Padres lead to 2.5, mainly, and this is the big key, because the Rockies were playing the Pads at San Diego and won. By the next day, coincidentally enough, the Rockies had cut the lead to 1.5. The lack of direct competition late in the season hurts the Braves chances tremendously this year. I said it once before, but the Braves really lost this All-Star race in July, just before the All-Star break when they let two late inning leads at Coors Field slip away.

As of now, the Braves are right with our 2007 pace, and you can remember what it took from the Rockies to overtake the Padres then. We'll see tomorrow if they're capable of cutting the lead to 2.5 with eight games left without the virtue of playing us directly. The Braves need help, and lots of it from the Cardinals and Brewers and Dodgers if they want to extend their season. The Rockies just need to keep on winning. 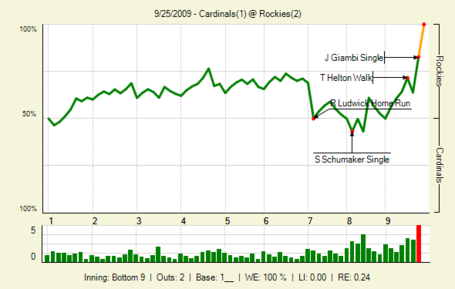