A night after the Rockies collected around first base to celebrate a walk-off win, St. Louis met midfield to celebrate clinching the NL Central at Coors Field after defeating the Rockies 6-3.

To start the game, Ubaldo walked Skip Schumaker on 7 pitches and Albert Pujols on six, the latter with an assist to home plate umpire Dan Iassogna.  A bloop hit, ground ball and soft ground ball single later, and the Rockies were quickly down 3-0.  The bad first inning raised Jimenez' first inning ERA to 5.91.  But like last Sunday, Jimenez settled down, allowing just two hits and no runs the next five innings.

Jimenez' rebound helped Colorado mount a comeback against Adam Wainwright.  In the third inning, Todd Helton laced a two-out double, one of his three hits on the evening.  Troy Tulowitzki followed with a ground ball to third, scoring Helton when Joe Thurston airmailed the throw past first.

The comeback was complete just an inning later when Yorvit Torrealba led off the fourth with a single.  Then up strode Brad Hawpe, who in the last 24 hours, was pinch-hit for in the ninth inning and dropped to seventh in the batting order.  To the delight of Rockies fans everywhere, he deposited a Wainwright two-seamer into the left-field seats for his 21st home run of the season.

The score would remain tied until the seventh, when Ubaldo hung a slider to Jason LaRue, who was only in the game after an injury to Yadier Molina.  LaRue hit it out to left for his second home run of the year and just his fourth RBI.

Ryan Ludwick added a pinch-hit two-run homer in the ninth off Matt Daley for the final score.

Join after the jump for the fangraph and the row call. 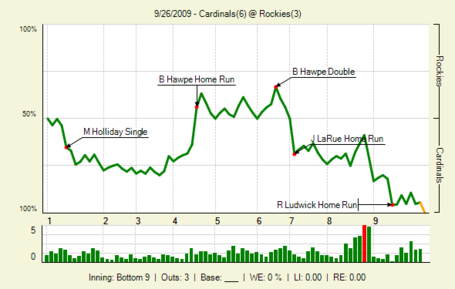