Once again, Omar Quintanilla's pixies were right about a Rockies victory this afternoon--though they very nearly were mistaken.

It was a game that, despite leading most of the way and having a bevy of opportunities with men in scoring position, seemed like the Rockies were going to lose. Clint Barmes had something to say about that.

The Rockies' second baseman came through in a big way with a suberb diving catch in short right field with runners on the corners and one out in the ninth in a one run game. Strangely, Albert Pujols, who had been intentionally walked and was at first, never broke stride and Barmes had an easy double-up of Pujols at first base to end the game. Huston Street got six outs for his 34th save of the year and Jorge De La Rosa, who struggled through five innings (4 hits, 3 runs, 3 BBs, 8 Ks) picked up his 16th win (16-9) while Kyle Lohse (6-9) took the loss.

Offensively, the Rockies struggled to execute once again in RISP opportunities, going 2-11 (several of them with a man on third and less than two out), but did manage four runs (with big RBI hits by Tulo, Hawpe, CarGo, and Helton) on eight hits (two each by CarGo, Helton, and Tulo).

With the victory and an Atlanta win, the Rockies' magic number only decreased by one to five over the Braves, who still sit 2.5 games behind Colorado in the Wild Card chase. It is likely mean that it is a two-team horse race for the final playoff spot in the NL, with the Rockies still very much in control of their own destiny. In addition, the Rockies finished the season series against the Cardinals with a 6-1 advantage--food for thought for a future potential playoff series against the Redbirds. 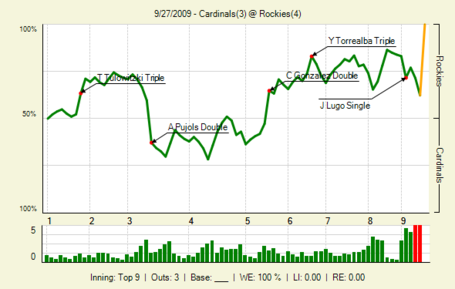