Share All sharing options for: Wow, that looked familiar.

Anibal Sanchez walked a career-high 8 batters over 5.0 innings of work, gave up 3 runs, all earned, while striking out 4.

What drives this point of familiarity home for Colorado is the complete lack of RISP hitting. The Marlins went 1-for-11 with RISP, and that one hit was hit so sharply that Dan Uggla was forced to hold at 3B with NOBODY OUT.

He never made it home.

On the flip side of the ball, it's not as if the Braves were a show of complete run-scoring mastery. They pulled 2 runs out in the 1st inning, scoring on a groundout and a sac fly. The baserunners were all walked by Sanchez. Runs 3 and 4 came from a Chipper Jones solo shot and a Kiko Calero bases-loaded walk. On the night, the Bravos were 0-10 with RISP.

But it's not as if they needed those two insurance runs anyhow.

Jair Jurrjens, Peter Moylan, and Rafael Soriano combined to 5-hit the Fish en route to a 4-0 shutout. Jurrjens pitched 7 innings with 3K and a lone BB to rookie Cameron Maybin. Moylan and Soriano kept it that way.

With this win, the Braves drop to 2.0 games behind Colorado in the NL WC race, and 4.0 back from Philadelphia in the NL East, with 6 games left to play for all 3 teams.

Fangraph and Row Call after the jump. 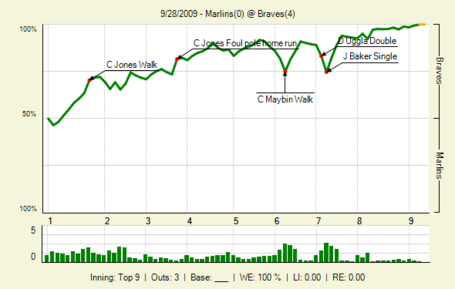