Jason Kendall. The guy who had exactly one more home run that I did this season coming into tonight's game, in 504 more plate appearances. Yet, with the way things have gone for the Rockies lately (not even all of which is their fault, necessarily), he was the one that drove the nail into their hearts and gave Brewers fans something to cheer about.

That was, until the now-seldom-used Chris Iannetta stepped up to the plate in the bottom of the 11th inning.

Iannetta blasted a 3-2 offering from veteran reliever David Weathers into the Rockies' bullpen to give Colorado yet another walk off victory, this time beating the Milwaukee Brewers 7-5. Iannetta was pinch hitting for Matt Belisle, who pitched a scoreless top half of the 11th to earn the victory. Chris' 16th home run of the season was by far the biggest of his career so far.

The game looked to be over in the 9th, as the Rockies rallied back from down 2-1 to take a 5-2 lead heading into the final frame. Huston Street struck out Casey McGehee, but issued a walk to Mike Cameron and allowed a single to J.J. Hardy. That set the stage for the longtime Major League catcher Kendall, who smacked a line drive just inside the left field foul pole and ripped the hearts out of nearly 40,000 Rockies fans. Street bounced back to get the final two outs of the inning, and Joe Beimel recorded what were arguably the biggest two outs of the game in the next inning as he lured Prince Fielder into an inning-ending GIDP.

The Rockies couldn't cash in offensively in the bottom of the 9th and 10th, but Brad Hawpe drew a leadoff walk to start the last half of the 11th, and after Jason Giambi popped out weakly to first, CDI came in and did his thing.

Jason Marquis overcame some early struggles and ultimately turned in a gutty performance, going six innings and allowing two runs on six hits. However, walks continue to be a concern for Marquis, as he issued four free passes.

Oh, and the Braves lost 5-4 to the Marlins (!), hence the Magic Number listed in the headline of this Game Wrap.

Check out the oh-so-interesting win probability graph, Row Call, and tomorrow's starters after the jump... 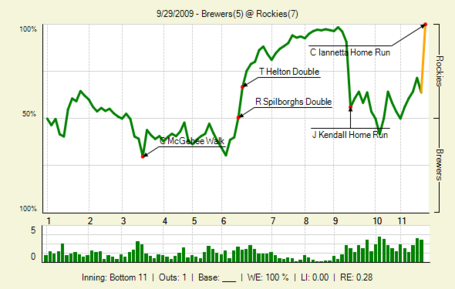