Rockies pop-up a treat for Mets on getaway day, lose 8-3

Share All sharing options for: Rockies pop-up a treat for Mets on getaway day, lose 8-3

Starting pitching was bad. Relief pitching was bad. Hitting was mostly bad. Oddly enough, with that combination of forces at work, the Rockies lost to Pat Misch and the Mets anyway. Yeah, surprising to me too, you would think these things had an inverse relationship or something and the worse your team played, the more likely they were to win a game, but apparently it doesn't work that way in real life.

Alright, so where does this latest loss leave the Rockies with 28 games left to play? If you're an optimisitic fan of Atlanta or San Francisco or a pessimistic fan of the Rockies, you're likely seeing it as part of an eight game pattern in which Colorado has gone 2-6 and seen its once daunting wild card lead evaporate. Extrapolating that out to the end of the season means that the Rockies finish the season at only 81-81 and well back of whoever ultimately wins the playoff spot. If you're a Rox optimist and/or a pessimist for those other two teams, the picture you take away is that the team lost a winnable game today but won the series, and continuing to win series the rest of the way should be enough to get them into the postseason.

I guess as an optimist you would also take away Chris Iannetta's two late hits, one a solo home run, one a triple, as a positive sign that his slump may at last be coming to an end. The pessimists will look at Jim Tracy's micromanagement and inexplicable reliance on Clint Barmes in the second spot of the lineup as troubled waters we'll have to get around still. Barmes vindicated Tracy somewhat by hitting his twelfth home run of the second half of the season. Barmes is 28 for 162 (.173) since the All-Star break, with half his hits going for extra bases. CDI is in the same club, 20 for 96 (.208), ten extra base hits. That whole Jason Marquis autumn slump demon seems to be rearing its head as well. Finally, of course, as the title is meant to indicate, the Rockies recent habit of getting underneath or uppercutting just about any pitch thrown to them is getting annoying really fast.

Ultimately, however, it's just one game whether you take a pessimistic or optimistic slant, and attempting to draw bigger meaning out of it will be largely futile, let's just hope the Phillies can come up with some offense tonight to take the sting out a little bit. And if that fails to materialize, well, winning against the Diamondbacks always cures a lot of ills. 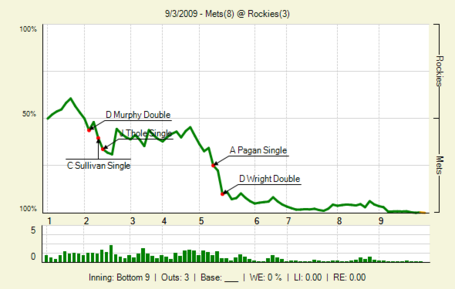