Share All sharing options for: Rockies 10, Brewers 6: Colorado now one victory away from securing playoff spot

One--the loneliest number, or so someone says. It's also the Rockies' magic number (no, not RockiesMagicNumber) after tonight's riveting victory over the Brewers. One win away from Rocktober again.

Two--a good number, as the three home runs the Rockies hit were all of the two-run variety. Todd Helton, Carlos Gonzalez, and Troy Tulowitzki hit those in the third, sixth, and seventh, respectively. Carlos Gonzalez also led off the bottom of the first with a triple and scored on a Seth Smith single.

And now we arrive at the pitching. What do Juan Rincon, Joe Beimel, Matt Daley, and Franklin Morales all have in common tonight? They worked to end the seventh inning. Yes, four relievers. It all went like this. After Jason Hammel struck out eight and allowed four runs in five innings, Jose Contreras treated us to an exciting sixth inning by loading the bases and ending the inning with a strikeout. Then Juan Rincon started the seventh inning off by watching a Ryan Braun single. Yanked. Joe Beimel enters and sees the same thing out of Prince Fielder. The hook. Matt Daley then recorded a K, a single, another K, and another single (this one scored a run). Time to go. Franklin Morales came in got a fly out. Anyone see the problem with that inning?

Ninety--the Rockies have now tied their franchise record for most wins including play-in games. 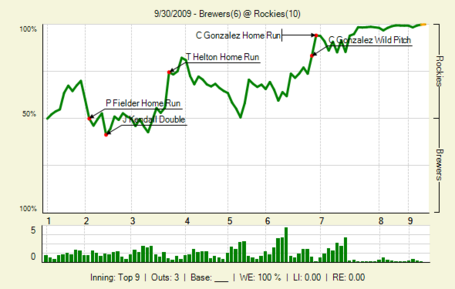