Share All sharing options for: Pinch this: Seth Smith and Jason Giambi rally Rockies past Diamondbacks, 5-4

Seth Smith hit the game tying double for the Rockies in the seventh inning, scoring Eric Young Jr. and Carlos Gonzalez. An inning later, Jason Giambi came through with his second go ahead single of the week, as the Rockies overcame a late 4-2 deficit to defeat Arizona and retain a one game lead over the San Francisco Giants in the National League wild card chase. With the single by Giambi and the walk by Young in pinch hitting rolls, the Rockies now are hitting .310 as pinch hitters in 2009. Smith, who still leads the NL in pinch hits with sixteen, is showing that he's just as capable of getting hits early as he is of getting them late, as the clutch double capped off a four hit night for him.

Smith's first double of the night off of Dan Haren drove in Gonzalez as the Rockies took an early 1-0 lead in the bottom of the first inning. Ian Stewart crushed a home run to right field in the second, extending the lead to two before the Diamondbacks would score four unanswered runs off of Jason Hammel, with a pair of defensive lapses by Clint Barmes providing an assist to the opposition. Matt Daley came in and pitched a perfect seventh to hold the line, and the Young drew a walk hitting for Daley in the bottom half. A bunt single by Gonzalez kept the rally alive, and both runners scored when Smith drove a shot into the right center field gap.

In the eighth, Randy Flores and Rafael Betancourt held the line, setting up the heroics by the bottom third of the Rockies lineup. Yorvit Torrealba extended his current hitting streak to thirteen games by leading off with a single. Clint Barmes pushed him over to scoring position with a sacrifice bunt, and then Giambi lifted a single to left over the infield to score Torrealba for what proved to be the winning run.

Franklin Morales closed the ninth for his second save of the week.

As the standings above show, the Rockies have gained a bit on Atlanta in particular lately, and the Braves have been pushed to a precipice of irrelevance by losing to Cincinnati tonight. The Giants and Marlins have kept pace, however, with wins against Milwaukee and Washington, respectively. The Rockies do appear (if the Padres can hold on) to be gaining another game on the Dodgers in the NL West tonight to bring that tantalizing prize back into view, but it may once again prove a mirage if Colorado doesn't go on a more sustained win streak. 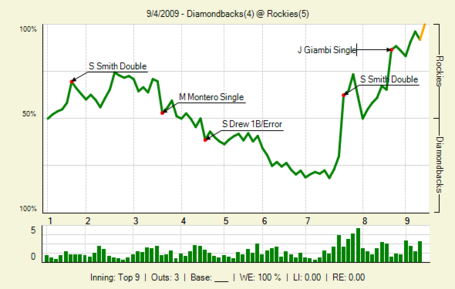