This is the good kind of I told you so.

Jose Contreras was every bit the pitcher that RMN and myself had hyped him to be, going 6.2 IP, allowing only one run on eight hits while striking out five Diamondbacks as Colorado defeated Arizona 4-1 to secure a second straight series victory. Contreras threw 94 pitches (59 for strikes) as he worked well through the Diamondbacks' lineup. Joe Beimel got out of a sticky situation in the seventh, while Rafael Betancourt pitched a clean eighth and Franklin Morales secured his third save this week.

On the offensive front, Seth Smith continued to go thermonuclear on Arizona (and most of the NL), going 3-4 with his 13th home run, two doubles, three runs, and a RBI. Can we all agree that Smith needs to be in the lineup on a regular basis over Brad Hawpe? He is now hitting .315/.403/.551 on the year (yes, that's a team-leading .954 OPS you see) and he's been arguably the hottest player in the majors over the last two weeks.

Other Rockies contributions included Carlos Gonzalez's home run (his tenth, giving the Rockies eight players with double digit home runs) to lead off the Rockies' half of the first inning (sort of a leadoff home run), Todd Helton's two RBIs, and Yorvit Torrealba extending his hitting streak to a MLB-leading 14 games.

The Rockies needed to win this game to maintain their one game Wild Card lead (and my prediction that they would never again even be tied for that lead) since the Giants won, and with the Dodgers winning the playoff picture looks much the same as it did going in today. Well, except for the fact that the Braves are playing their way out of the picture, which is nice, and the Rockies have now solidified their rotation with Contreras while Morales and company holds down the fort in the bullpen.

Despite the close score, it felt like the Rockies were in control the entire way. 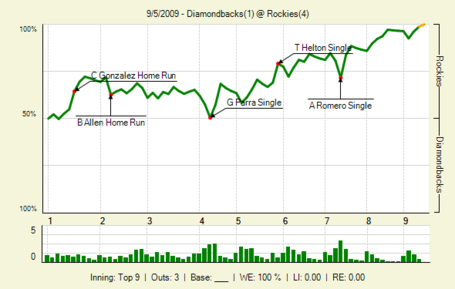 Many in the crowd were likely corrupted by the distractions of college football (I was sucked in myself).