It took five tries, but Jason Marquis finally picked up win number 15, using a solid outing to beat the Cincinnati Reds 3-1, giving the Rockies their fifth straight victory. He didn't get a whole lot of help from the offense, but Eric Young Jr. was the obvious exception. EY2 went 2-for-3 with a couple of runs scored, and hit his first career big league home run, a shot to left field off of Pedro Viola.

Marquis (15-10) lasted 7.1 innings and allowed just a run on four hits, and struck out a season high seven batters. The bullpen picked up the last 1.2 innings with Franklin Morales pitching a scoreless ninth, with two K's, to pick up his fifth save in as many opportunities.

Offense was at a premium in this one, as the teams combined for just eleven hits (seven were off the bats of Rockies players). No Red had more than one hit, while only Young managed more than one for the Rox. Notables for the Rockies:

The Rox currently lead the Giants by 2.5 games, and the Giants trail the Padres 4-3 late in their game. I'm sure you can check the comments of this thread, or tonight's game thread, to discuss the SF-SD contest by 3 full games in the NL Wildcard standings, as San Francisco fell 4-3 to the Padres.

Check out the WPA graph, Row Call, and tomorrow's starters after the jump. 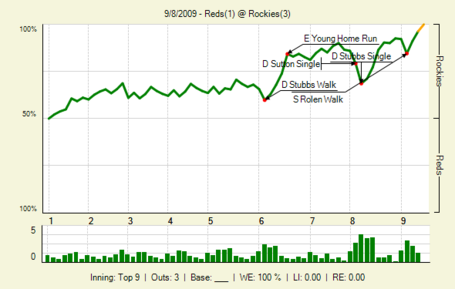