Patience and Plate Discipline: What has it gotten us?

Share All sharing options for: Patience and Plate Discipline: What has it gotten us?

It's the top of the 8th and the Rockies are down by 1 with a runner on 3B with 1 out. Ian Stewart is at the plate. The pitcher takes the sign, and burns a 94 mph fastball right down the middle.

THAT'S A PITCH TO HIT, STEWART

What on earth is he waiting for?

I do not spilly him taking that pitch

We've seen it so many times. The Rockies wait on pitches early in the AB and find themselves suddenly at a 2-2 count when all they need is to make good contact with the ball. Instead of getting the hit on the 1-0 count when a 24 year old pitcher desperately trying to make up for the leadoff walk throws anything that will cross the plate, we're sitting around waiting for...something even better, I suppose.

These problems drive us insane in the game threads. They destroy situational hitting, and spark massive debates between baseball fundamentalists and the Sabrmetrics crowd, arguing the merits of a season-long body of work and the "what-have-you-done-for-me-lately" analyses.

Join after the jump as we look at the hard data.

The ugly facts are as such:

The Rockies are 4th in the majors in strikeouts (the bad way).

However, on the flip side of the coin, we need to also look at these facts:

The Rockies are 4th in the majors in walks.

The Rockies are 22nd in the majors in terms of swinging at pitches outside of the zone (the good way).

The Rockies are 24th in the majors in GIDPs (the good way).

Finally, the most important facts we need to look at:

The Rockies are 6th in the majors in Runs per Game (R/G).

The Rockies are 1st in the NL Wild Card standings, 2nd in the NL West.

Now the tough part about this is trying to draw a straight line between the above listed facts. Are the Rockies a top-rated offensive team (2nd in the NL behind Philly) because we lead the majors in P/PA? (For the record, Philly is 11th in P/PA.)

Well, the answer is that there is no answer.

Statistically, there isn't a strong correlation between Pitches per Plate Appearance and Runs or Runs Created. I plotted the P/PA for each of the 30 teams against Runs per Game, and found out that there was a decent positive correlation between the data. 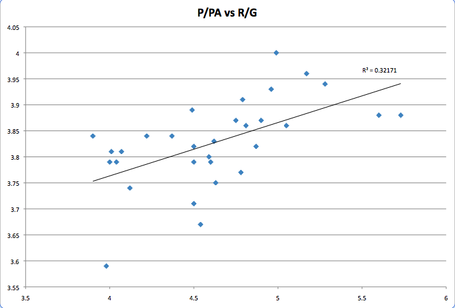 To build on that, I plotted the P/PA with a form of Runs Created for every player in MLB with 100+ PA. Again, there's a positive, but weak, correlation. 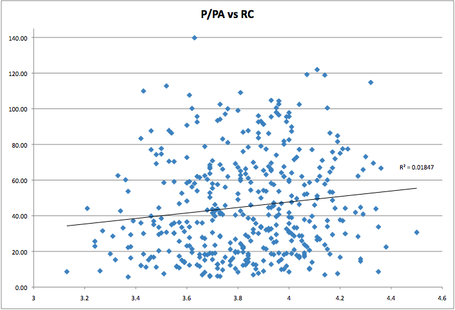 So what these graphs are telling us is that P/PA is a good thing. They trend toward the correlation we like to see: that more P/PA results in more runs, which will hopefully result in more wins.

What's also interesting to look at in this study is how the Rockies perform on various counts:

The bolded numbers are the highs. We obviously walk the most on a 3-0 count, but it's interesting to note that we strike out the most on a 1-2 count rather than a 0-2 - we don't bite as much on that first waste pitch. However, it's also interesting to note that we hit the most home runs split between the first pitch swinging and a 1-1 count, while we also ground into the most DPs on that first pitch as well. 1-2 counts and 2-2 counts are right out. We punch out the most on the 1-2 count, but we hit the worst on an 0-2 count - again, which makes sense. After the 0-2 count, the Rockies have a combined .485 OPS. We also walk a lot more than strike out on a full count.

That said, we're still a team that walks a lot and strikes out a lot. But tell you something you didn't know, right?

The one thing we CAN infer, however, is that higher P/PA leads to shorter outings by starters, eventually, and hopefully can result in something to capitalize on. Looking at the inning-by-inning batting production, the 4-6 is the hottest 3-inning chunk for the Rockies, which lends credence to the concept of wearing down pitchers. Observe:

We don't really walk any extra in any inning group, but we clearly hit better in the middle innings - lining up nicely when a starting pitcher starts to wear out.

Based on the correlations above and the counts that the Rockies seem to be most productive on, it's hard to really draw a line between everything. We clearly are a patient team, taking the most P/PA and walking the 4th most, however, we also strike out more than just about anyone. We wear down pitchers well, and capitalize in the middle innings. I don't want to put TOOOO much credence on the high discipline numbers, as we can't necessarily say one causes the other, we can't say that our high P/PA makes us a top offensive club.

But that 5th in the majors in runs scored and 6th in R/G? We can hang our hat on those jussssst fine.

Oh and thanks to PF for the idea to write this thing.