Back to the game. It's the bottom of the ninth and the Rockies are down 2-3. Scott Rolen had just hit a homer in the top half of the inning to put the Reds ahead. Yorvit Torrealba, despite his hitting exploits of late, predictably recorded an out quickly. Then Clint Barmes knocked out a double. Tying run on second. The Giambino works a walk. Ryan Spilborghs walks (we spilly you, Ryan. Or is it we Smitty you, now?) KarGo and two outs now. Seth Smith steps to the plate with the leverage index being a hefty 10.87. The count is 3-2 after seven pitches. BAM!!! One run scores, the second baseman can't field the ball to make a throw, a second run scores! The Rockies win! The Rockies win!

That's how it feels to be a Rockie, to be a Rockies fan right now. Knowing that a comeback is possible, that Mr. Late Night continues to appear. These aren't your Rockies of old; these are your Rockies who have learned to eat soup with a knife.

A bit lost in yet another amazing comeback was Jason Hammel's super solid start: 7 1/3 IP, 3 H, 2 R, 1 BB, 8 K. Unfortunately, he didn't factor in the decision, but Matt Daley picked up his first career win.

The graph and Row Call after the jump. 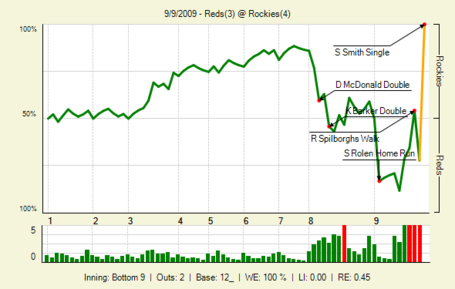