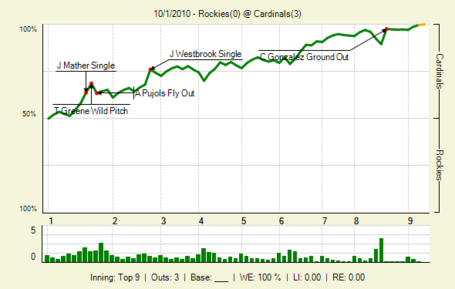 Dexter Fowler had two of the four Rockies hits tonight, including a double, and he seems to be one of our rare bright spots in the losing streak. Jorge De La Rosa pitched erratically and ultimately not well enough to win, but the best he could have hoped for was a tie with the way the bats reacted to Jake Westbrook tonight.

As the picture indicates, Miguel Olivo suffered a head injury and had to be carted off the field. That's never a good image and we wish Olivo the best, but it's suitably symbolic of the Rockies season at this point.