Share All sharing options for: Cardinals 1, Rockies 0 (11): Offense Fails to Get Ubaldo Win #20

Ubaldo Jimenez really wanted to reach 20 wins.  That much is obvious, and he could not have done any more than he did.  Unfortunately, Jimenez came up short, but it had nothing to do with him.

Ubaldo was as dominant as he has been all season, striking out 10 for the fifth time this season, walking two and allowing just three hits over eight shutout innings.  He was credited with a .527 WPA from the mound, higher than any outing all season.  Truthfully, even that doesn't even illustrate his performance fully, as he wriggled out of the Cardinals' two biggest scoring opportunities that were set up by errors by Todd Helton and Ian Stewart.

The offense simply failed to capitalize on any opportunity provided to them by Kyle Lohse, who was barely capable of throwing half of his pitches for strikes.  Inning after inning, the Rockies butchered scoring opportunities.  They wasted two leadoff doubles.  Two double plays erases chances in the first and second innings.

The young Rockies' ace set franchise records for K's (with a fifth inning strikeout of Colby Rasmus), ERA, WAR, wins, H/9, HR/9, and WHIP.  He was the first Rockies' starter not only to pitch before the fifth inning in an All-Star Game, but he was the first one to start the game.  It has been a season to remember for Ubaldo, and as much as a twentieth win would have meant, that doesn't change the magnificence in which Ubaldo performed this season.

It may be the Year of the Pitcher, but Ubaldo Jimenez started it.  As far as I'm concerned, he finished it off too.

Oh yeah, the Rockies lost today too.  Franklin Morales pitched the 11th inning, throwing just 4 of 12 pitches for strikes.  He walked the first two batters, then a Matt Holliday single to right was misplayed by Ryan Spilborghs for the winning run. 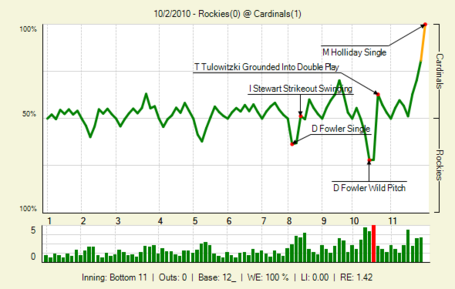