Share All sharing options for: Rockies Go Meekly Into the Offseason, Lose 6-1

The Rockies trotted out a AAA lineup today against Jeff Suppan and the St. Louis Cardinals. The results, a 6-1 loss this afternoon in which Colorado was 0-7 with RISP, were predictable. Esmil Rogers (2-3) took the loss with two earned runs in four innings pitched, but really

Positive notes: Dexter Fowler finished the season strong with a 2-3 day and provided the Rockies' only offense with an eighth inning solo shot (6), while Clint Barmes went 2-4 with a double in what was likely his final appearance in a Colorado uniform.

Not positive: Michael McKenry got his first start and hit third, which was nice, but he also got his first Golden Sombrero (0-4, 4 Ks), which was not so nice. Chris Iannetta finished below the Mendoza line (.197 BA). Jeff Francis, another Rockie making perhaps his last appearance for the team, had a forgettable first relieving appearance. Chris Nelson had one of the more horrific errors in judgment that I've ever seen in a MLB game to give St. Louis its first two runs. And the list goes on.

This is the opposite of closing the season on a high note, with the Rockies losing 13 of their last 14 games to fall to 83-79 on the season. Fun fact: that's the same streak the CSU Rams football team are currently on. Colorado didn't score for 30.1 straight innings in this series.

Of course, we all know that Octavio Dotel is the problem. As Yokel has pointed out in his FanPost, the Rockies' losing streak began the first night he pitched for the team. Dude is like Kryptonite.

Just because the Rockies' season is over, please don't go away from Purple Row. We'll have playoff coverage as well as a bevy of articles reviewing the season and previewing the offseason. 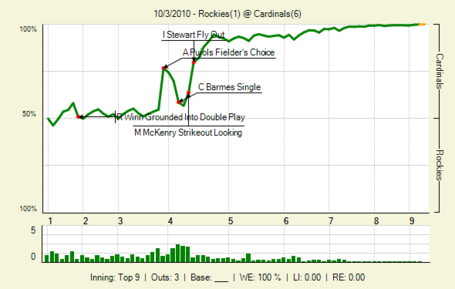