Share All sharing options for: Prospect Spotlight: Will Swanner, Catcher

There are not a lot of players like Will Swanner.

He was drafted in the 15th round in June out of La Costa Canyon High School in Carlsbad, California, just south of Oceanside, between San Diego and Los Angeles.  He played in less than 20 games for the Casper Ghosts of the Rookie level Pioneer League, yet the catcher catapulted all the way to #17 in last month's PuRPs rankings.  From 15th round to nearly top 15 prospect in barely 15 games.

Moreover, he was ranked by Baseball America as the Pioneer League's tenth best prospect and the top Ghosts hitter, even ahead of #10 PuRP Rafael Ortega.  That's quite an accomplishment, though it completely undermines the player Swanner was thought to be on draft day.

The reality is Will Swanner, who turned 19 two days after the season ended, was considered a top three round talent.  This scouting report two weeks prior to the draft tabbed him as a 2nd or 3rd round pick, but he fell precipitously due to being a perceived lock to attend Pepperdine University.  He had accepted a scholarship to Pepperdine two years ago, whom also offered a scholarship to Will's brother Michael Swanner, who despite being just over a year younger, was in the same grade level as Will. The Swanner brothers were to enter Pepperdine together as freshman; instead, only Michael Swanner will pitch for Pepperdine as a freshman next year.

Chris Swanner, the father of both boys, had this to say about the situation in an email to me: "It would have been a baseball dad's dream to have both boys go to the same great college baseball program, one pitching and one catching. As it turns out, they are both where they should be."

The Rockies took a flyer in the 15th round, then offered $490,000 (essentially third-round money) which was enough for Swanner forgo potentially starting at Pepperdine as a freshman (and catching his brother) to sign and report to Casper.

Pre-draft scouting reports suggested Swanner was to have plus power, perhaps enough to switch to an outfielder if his defense behind the plate didn't work out.  In his 19 games for the Ghosts, he didn't disappoint, posting one of the more ridiculous stat lines you will ever see.

He homered every 10.85 AB in 2010, a Ruthian rate (check Ruth in 1929), sported a solid average and a ridiculous IsoP.  That kind of power was coming from an 18-year-old kid who had not played in months, and against older and more developed competition to boot.  On the flip side, he struck out dizzying 42.3% of the time, which, as a reference, matches Mark Reynolds' MLB-high this season.  Also...no walks.  Zero.

I traveled to Casper to attend the final Tuesday game of the season on September 7.  I knew Swanner's unique line coming in, so I expected to see a free swinger with a good load in his bat, and that's what I saw.  Take the jump for more.

Swanner was not quite as large as one would expect with those power numbers.  Then again, he was just 18.  I was only able to watch one game; consequently, I only got to see Swanner hit four times.

Despite having a fairly long swing, scouting reports suggest he could hit for average and power on the basis of plus bat speed and potential for shortening his swing, and his natural athleticism leads to a ceiling as a very toolsy catcher.  While still very raw now, he has the natural tools to blossom into an above-average catcher in the majors.

To say Swanner is aggressive at the plate is an understatement.  In the game I attended, he swung at all but one pitch thrown to him, a fastball that bounced five feet in front of the plate.  That pitch followed two whiffs on pitches in the dirt.  He was consistently well in front of breaking pitches, suggesting he still has some work to do at pitch 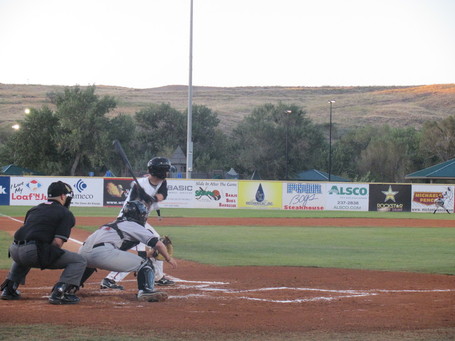 recognition.  After his double in his first at-bat, he struck out three consecutive times, fouling off only 2-3 pitches.

It is no surprise with that approach he had such a high strikeout rate in his pro debut, though it should be noted the large gap in talent from high school to the Pioneer League.  Pitchers come from the Dominican League with fairly polished breaking stuff, and pitchers in their low twenties out of college are a common occurrence.

While some hitters never learn to hit the breaking pitch, pitch recognition is a skill that can be learned and improved quickly, as opposed to power, speed, or bat speed.  He reported to the instructional league in Arizona on September 19 and has no doubt focused on that aspect of his offense.  Instructs end this week, and Swanner will then go to play winter ball in the Dominican Republic.

Swanner acted as a designated hitter in the game I attended, so I unfortunately was not able to witness his catching skills.  Various reports I have read state he has very good arm strength and is "flexible and athletic behind the plate," yet remains raw.  David OhNo mentioned one defensive quirk Swanner has:

One of the knocks on him is that he has a hitch/pause at the top of his release that hinders his pop time. It is something that should be smoothed out with work in instructs.

The trek to the major leagues as an 18-year-old from the Pioneer League is a long one.  It takes a lot of work and often an unnaturally high level of self-confidence.  Very talented players can get in their own way mentally, which adds to the difficulty in projecting prospects.  To grasp the full mentality of a minor leaguer can be difficult, though Will's father Chris (who has posted dozens of videos on Will on Youtube) offered this about his oldest son:

He has always been the first guy to high-five someone when they succeed and has always been the first guy to high-five them when they fail. He is not afraid. I don't know if it is just confidence or arrogance, but he has never been afraid of failure. He might strike out 20 times in a row, but he is thinking that he is going to hit a bomb his next AB, and when he does it's no big deal because he knew he would.

There remains a lot of work to be done to polish Swanner into a major league catcher, but given his natural toolset and age, there is reason to be optimistic that ceiling is reached.