Los Angeles Dodgers sign Jon Garland to one year, $5 million contract - ESPN Los Angeles
Another one bites the dust. The window for the Rockies to sign a free agent pitcher is closing rather quickly, and it doesn't appear the club will go after anyone at this point. If they do, it will likely either be Carl Pavano or a guy from this list of reclamation projects. Out of those guys, who intrigues you the most? I like Chris Young, who can be virtually unhittable at times despite not having great stuff. I also find myself wanting to choose "none of the above" and would rather place all of my bread into the Gavin Floyd/trade basket.

Strittmatter joins Hurdle’s staff | Inside the Colorado Rockies
Longtime Rockies bullpen catcher Mark Strittmatter has been wooed away by Clint Hurdle and the Pittsburgh Pirates, as he was offered additional duties such as the pitchers' hitting coach. Many have said Strittmatter has a very calming effect in the bullpen and has had a positive impact on Colorado's catchers over the years. I'm placing all my chips on the completely-made-up-by-me rumor that he was the reason Chris Iannetta was being held down. I'll do anything to make myself optimistic.

Bryce Harper among the most impressive hitters at the Arizona Fall League - ESPN
In Jason Grey's Insider-only piece, he recapped the hitters of the AFL. The Rockies had two position players in the AFL, and it seems Grey somewhat likes both of them, though he thinks Charlie Blackmon will be a very useful fourth outfielder (but makes sure to point out that the title isn't necessarily a knock on him), and envisions Jordan Pacheco as an "empty batting average" guy but still "one to watch."

Kaz Matsui, 35, agrees to deal with Japan team Rakuten Eagles - ESPN
Say goodbye to Kaz Matsui, who will likely finish his career in Japan. I'll certainly never forget Kaz's heroics in 2007 - notably, his grand slam off of Kyle Lohse in the NLDS in Philadelphia. Too bad Kaz wasn't with the big league club this past September when the Rockies were shut down by Lohse, preventing Ubaldo Jimenez from getting win #20.

Click after the jump to see what I'm doing this offseason to express my love for baseball and the Rockies.

It's only in the very beginning stages, but I would like to share this with all of you: 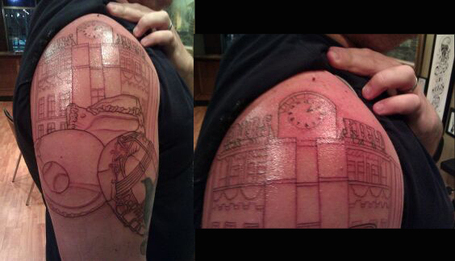 I'll post updates as I get more work done.